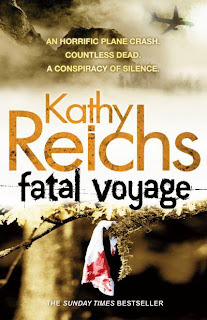 Temperence Brennan is sent in to help identify victims of a commercial plane crash. The cause of the crash is unknown and many are speculating that it could have been deliberate. The remains are scattered over the mountains of North Carolina which makes Temp's job that little bit more difficult. She does manage to find a foot that somehow doesn't fit in with any of the passengers on the flight manifest. It also seems to be older too. However, someone doesn't want her investigating where it came from. No sooner has she made inquiries when she is kicked off the team and her reputation is called in to question. The people she has worked with the longest are no longer supporting her so Temp is on her own. She has to find out what happened to this person and clear her name.

This is the book I should have read when I read book six a while back (stupid boxset listing them in the wrong order). I didn't feel like it filled in any gaps though. Temp's personally life is still up in the air with her daughter gone awol and her not knowing where she stands with Ryan. I have to admit that for once the personal life of the main character doesn't really interest me all that much. In these books, for me anyway, it's all an aside. I could live without it although it does of course add to the main characters personality. It did amuse me how Ryan, a Canadian detective, was worked into the story.

I enjoyed the plot itself and felt Temp's frustrations as so many people were willing to believe that she would do a bad job and tarnish her reputation. At the same time though it was a little unbelievable how quickly it happened. She was frozen out straight away and not a single person above her was willing to question it or stand up for her. I think in reality it wouldn't have happened quite like that. For the purpose of the book though it had too. I also wouldn't want to be a friend of Temp's. They all seem to appear in each book, Temp is close to them and then they are murdered or badly hurt.

A good ending too. Wasn't quite expecting it. I never really do expect it with her books mind you. There is usually always some big conspiracy theory going on and this one was no different. It certainly makes them different.
Posted by KarenSi at 22:54