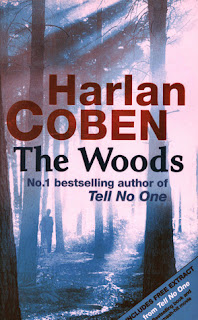 Paul Copeland is acting Prosecutor for the County. In his current case he is representing a young, poor, black, stripper although the odds are against him. They are going up against two white, rich,  frat boys who raped her at a party. Paul knows the girl is telling the truth but is having difficult proving it. Meanwhile he is being distracted by his past. A man has turned up dead who turns out to be someone Paul used to know. Problem is he was supposed to be dead twenty years before. That night two young teens were found dead in the woods at a camp site. Two others were missing and believed dead. One was this man and the other was Paul's sister. The death of Paul's sister tore his family apart and now he wants to know what happened to her.

I finished this on Saturday night and I don't usually take this long in getting round to reviewing a book. As I mentioned in another post I have been on the fence with this book. I originally rated it as a three on Goodreads but have been considering bringing it down to a 2. Whilst I did enjoy the book I had lots of problems with it. I am trying to decide if it is my bias towards the author or if it is my worry of being biased that is putting me off pushing it down. The truth is I have met this author before. He was signing books at an event my friend was organising and whilst he was very nice to his fans he was pretty horrible to the staff. Including my friend who got so upset she threatened to quit her job. So it's been a long time in me picking this book up. Now my friend was probably slightly over sensitive as she was under a lot of stress and I am sure authors have their off days (although having said that another friend of mine now refuses to read Terry Pratchett for similar circumstances - authors booksellers are your fans too, worth remembering). So I did my best not to let it put me off the book.

As I said I did actually like the book. It was a little slow in starting for me but quickly built up a fast paced and kept it. I stayed interested in the story right to the end after that. I liked the plot. If I am honest it was a little far fetched but I have liked other books for that reason and I liked this one too for it. It kept me guessing and in the end I was unable to work out for myself who was responsible for what. A good sign of a thriller I think. It was easy to read and distracting. I picked it up for that reason. I needed something like it to break up those classics.

Here is where my problem lies. I hated the main character. He is young, successful with political aspirations. He is looking after a young daughter on his own since his wife died of cancer. He relies on his sisters family to help him out. Sounds good but he is also a smart mouth. As I read more and more crime books I am discovering this is a common theme. Probably to add humour to a story that's really quite dark. In this character though it didn't seem at all appropriate. Not to say that he shouldn't have a sense of humour but I just felt that someone with his ambitions would have behaved a bit more professionally. Then there was his description of his sister in law. A woman who uprooted her family so that he wouldn't have to cope on his own. Who is there for him and who would do anything to protect him and his daughter. Yet (I'm paraphrasing) he describes her as ugly and clearly he got the hottie in the family. He doesn't say it like that but he might as well have. Then there is his relationship with his six year old daughter which comes across as very cold. He has brought her up on his own and yet she is never excited to see him and often seems to be taking teenage strops. It doesn't seem to bother him either.

Lastly there was the constant need for pop culture references. I swear I would almost think that Google and Apple were paying for advertising space. Need to find out something about anything? Just google it. I am sure we are all guilty of that but for every character to do it at every opportunity just seemed a little off. Plus it didn't feel a natural part of the book. Almost like it was shoved in there. Same with the constant iPod references. He did rebel a little and mentioned using Yahoo and then gave an unnecessary description of all the favourites saved on the characters page. Had it been early on in the book when we need to be able to relate to him then fair enough. This was quite late on though.

I am keeping in mind that this is a stand alone and maybe the author does better with series. I know I prefer Deaver's series over his stand alone books. I did like it in the end so I am keeping it at its 3. I feel a little guilty as there are other books which have similar problems but I enjoyed more. But then I liked the characters in those. I don't think that I will be reading any others by the author. As much as maybe I should give him another chance I think I will just annoy myself if I do.
Posted by KarenSi at 03:15