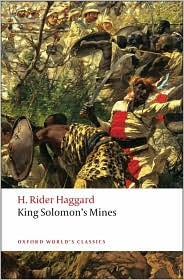 Allan Quatermain is born of England but makes his living as an old hunter in South Africa. Sir Henry Curtis and Captain John Good seek him out and request his help based on his sensible reputation. Sir Henry is looking for his brother who two years before had left on a quest for the mines of King Solomon. Quatermain has heard a lot of tales about these mines and has some idea as to where they might be. Not one for adventures though he has to seriously think on it before accepting a task that is likely to see all of them dead.

When I picked this up I was expecting an adventure story. After a very slow start and adventure story was exactly what I got. despite the fact that it seemed to take it's time to kick off and for the characters to set out it managed to fit an awful lot into a short space. There was a disastrous hunt, a trek across a desert, a painful climb across a mountain, a revolution and a war, a treasure hunt and forbidden romance. Each one of these was a tale in itself. The section with the war and revolution actually read like a very different story than say the great hunt.

The narrator, Allan Quatermain, comes across as a likable man. I don't remember his character in The League of Extraordinary Gentleman (my reason for reading it) other than the fact that he was one of the good guys. So I had no expectations of him. He is fairly modest and cautious and know his own limits and faults. His sole concern is that his son should have enough to finish his degree in medicine. Although his wife is dead it sounded like he was very much a family man. A little surprising considering he is also meant to be a famed hunter. He did seem to stray from the story quite a bit which explains the slow start. As soon as any action took place though he was more focused and I was riveted to the story. Had it been like this from page one I think it wouldn't have taken me a week to read it.

As well as adventure it also had it's humour. Picture a man being forced to walk about without trousers so that an entire tribe of people can admire his beautiful white legs. It's especially funny since poor Good is so modest and is very vain about his attire. It also has its share of creepiness in the form of the evil witch Gagool.

Yes there is racism in there and it's a little sexist too but I was able to ignore most of it since it wasn't completely in your face. It was more hints of it than anything else. I think when reading adventure stories dated from this time you are going to have to expect it and ignore it. If you can manage that then it does actually make for a fun book. As much as I enjoyed it though and as much as I liked the character Quatermain I don't think I will be reading any others in the series any time soon (although never say never).

I read this as part of the League of Extraordinary Gentlemen challenge hosted by Hannah of Booking In Heels. The point is to read the books starring each of the characters that appeared in the film. This one was read for Allan Qutermain. If you want to see reviews by others taking part you can do so here.
Posted by KarenSi at 23:50