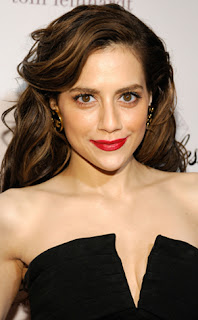 This month prompt is about the character and we can choose any we want from the classics book we read. I decided to go with Dora Greenfield who was one of the main characters from Iris Murdoch's "The Bell". I can't think of anyone who looks like how I envisioned her but Brittany Murphy in brunette days is as close as I can get. Dora would have more curves though. I know the book describes her as having golden brown hair and blue eyes but I just couldn't picture her like that. Actually I found her description of her hair a bit odd. Described as growing in 'flat strips'.

Anyway, the author immediately begins describing what life is like for Dora. She is young and unhappy in her marriage. Her much older husband scares her which makes her want to run away which she does in the first chapter. She also regularly goes back to him for the same reason which again she does in the first chapter. The first two sentences of the book tell you this. Murdoch describes how Dora thinks and feels and from that we get the impression she is rather flighty and probably too young to have married. She hasn't experience much of life yet and married life didn't quite meet her expectations. It's clear that her husband loves her but she feels repressed by him which encourages her to push away from him. It doesn't seem to occur to her that moving in with another man is wrong.

My opinion of Dora changed as soon as we seen her from another characters perspective. From hers I liked her. I didn't approve of how she dealt with her problems but I put that down to age and her naivety. She came across as almost an innocent. When through the eyes of others though I disliked her. She was callous of her husbands feelings and came across as a tease. Instead of being innocent she was selfish with no thought of others. That feeling would change again as soon as I was reading from Dora's view. Dora herself didn't change until the end of the book. Even then she didn't change all that much. It was just that circumstances meant she had to change. She began to take charge of her own life and become independent which was what she really wanted at the start but just didn't know it. Her character was certainly believable. She wasn't this perfect individual and neither was she a bad person. She was human and Murdoch was fantastic at showing the different sides of people. Seeing her through others eyes certainly helped with that. Would I want to know her? I'm sure she would be a lot of fun but I wouldn't expect much out of her as a friend. She's too flighty and unreliable.

This prompt was for the Classics Challenge hosted by Katherine of November's Autumn. If you want to see what other characters are being written about you can do so here. You can also see my review of The Bell here.
Posted by KarenSi at 04:29