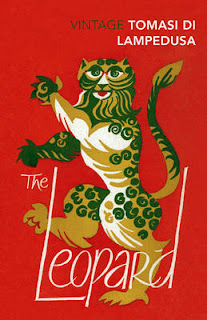 The Prince of Salina in Sicily loves his family and his home. He is loved by both his family and his people. There he isn't just a prince but a King. His way of life is threatened though by the invasion of the red shirts. Sicily must become part of Italy. As he tries to accept it and go with the times he is aware that to do so means that what he loves very well may be lost.

Again it was my classics loving friend who recommended this one. It's set in the 1860's and was published after the death of the author. I do believe that Di Lampedusa could almost have been telling the tale of his own family.

The book is well written. It starts with the Prince during his golden age. His family may irritate him at times but he loves them and they listen to him. His people also look up to him. It then follows on with Garibaldi landing on Sicily and his way of life begins to change. It means the end for the line of the Prince of Salina. The book is able to portray this through the decline of the Prince himself. As he accepts it and doesn't fight it he watches slowly as the things he loves ebbs away. Things begin to happen that would never have happened before. Such as the marriage of his beloved nephew to a beautiful but common girl. As these two are courting and play games round the grounds and home of the Salina we also see the decline of the times. Many of these rooms are much forgotten and lost to time.

As a result of this the book has an air of sadness almost from the start. These are people of privilege residing over villages of commoners. Despite that you can't help but feel for the Prince. The change is inevitable and the Prince accepts that without a fight so there isn't that edge of action. Had there been that it would have changed the entire tone of the book. I think this is one that will stay with me for a long time.

Another Vintage cover but not my favourite this time although it does fit with the book. The symbol of the house of Salina is the Leopard. It's found throughout the book. The Prince often compares himself to the leopard even in his decline.

I read this as part of the classics challenge hosted by Katherine of November's Autumn. I've still to do the prompt for it and I will actually do it this month. No excuses this time. I quite like the sound of this months prompt so it will be a shame if I don't take part.
Posted by KarenSi at 23:23