The Phantom of the Opera - Gaston Leroux 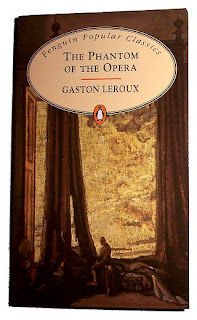 Underneath the cellars of the famous Opera house there lives a ghost. A ghost which has the new managers at their wits end. A ghost that is also perceived as the Angel of Music by young singer Christine Daae. Her father told her he would send her an Angel to teach her to sing as he did. As it would turn out this ghost is no Angel but a monster who is determined that Christine Daae will belong to him and no one else. This puts the Viscount of Chagny in danger. A childhood friend of Daae he finds her again as she takes the stage and wows the audience with a voice no one ever suspected her of having. The Viscount's attentions are met with great jealousy from the ghost and he threatens everyone if Daae does not promise herself to him.

I loved the whole mystery behind the ghost. I still remember the details of the story from my first reading (I have seen the film but I am sure it doesn't have everything from the book). However, I was seeing it with the new eyes I had hoped I would see Dorian Gray with.

I loved this monster who lived beneath the Opera House. How can you not feel sympathy for someone who was shunned and hidden by his own parents who couldn't stand to look at him? Of course that doesn't excuse him for some of the deplorable things he did and from his past. In the end though he only wanted to be loved or accepted. Each time he was accepted he was threatened or chased away. It's quite sad really. I guess he saw in Daae a quiet, sweet soul who might actually see him for more than a scarred face.

I actually liked him more than his rival, Raoul Chagny as he was just a little bit whiny and demanding. Very much like a spoiled child and the one time Daae stood up to him I wanted to applaud. I would have quite happily have lived without him in the book but then there wouldn't have been much of a story really.

The book was a great mystery and I wish I had loved it as much the first time round. I liked the fact that it wasn't just about this singer and her Angel of Music. I especially liked the details of the Opera ghost getting one over on the new management. Yes, I am rooting for the bad guy here and I'm okay with that.

As I said I read this for the League of Extraordinary Gentlemen challenge. Funnily enough the character to focus on is the Phantom himself. I am sure he was a bad guy in the film too. Not that this surprises me. He always did seem to fall in with a bad crowd. If I remember his character in the film though his original version is much more eloquent. I think I prefer him in the book. Just two more books in this challenge to go. Both unread before and I am looking forward to them. This challenge is hosted by Hanna of Booking In Heels and you can see others reviews of the various the challenge focuses on here.
Posted by KarenSi at 13:22