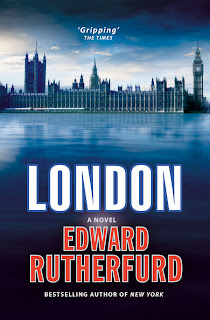 London is one of the biggest cities in the world which began as a small celtic village. After several invasions the village eventually became a city which was prosperous for some and not so much for others. The Duckets', Doggets', Bulls', Silversleeves and Barnikals' are just a few of the oldest family lines. They each have interacted with each other which has had consequences throughout their future descendants. They have interacted with famous historical figures, Kings and had a part to play in many historical landmarks. They have each shown that even the smallest decision can change the fortune of future generations.

Writing that wee blurb was actually quite hard. How do you write a blurb for a book that follows family lines from before the roman invasion right up until WWII? All his books follow this method but with different places. Sounds formulaic but it's one of the best ways of writing historical fiction. Or at least one of the most interesting that I have come across. The amount of research that has went into each of these books is astounding.

The book is split into chapters and each chapter interacts with an important era in history. For example the first chapter we the the Celtic family, later known as Ducket, as they prepare for the roman invasion. The families have interacted with famous figures such as Shakespeare and Dick Whittington. I especially enjoyed reading about figures that I have read up on myself such as Henry II and Henry VIII. Although I am not an expert there didn't seem to be any errors to me although the author would have taken liberties when these figures interacted with his characters.

The characters themselves are just as interesting. I liked the fact that the good fortune of a family didn't necassary continue through out the family line as misfortune or greed took over. In one era the main character from one of the families might be a nice guy that we hope will get everything he is looking for. One or two generations down we might hope the character with the same family name gets what is coming to them. It felt more realistic that way and as a result was far from dull.

It is a large book but if you wanted you could take each section and read other things in between. I did try that since it was too large to carry around. In the end though I found that the book I was reading alongside this got left behind as I wanted to keep going. A huge book and I couldn't put it down which is why I read it in two weeks. It would have been quicker had I been able to carry it around.

I've only read his New York one and whilst I like that one better I was more aware of the history behind this one. I think it was the simplicity of the writing which mirrored the simplicity of the era the author was writing about. It did seem to grow more complex as time went on. I can see why the author did that but it meant that it took me a little longer than normal to warm to it than I did to New York. That's the only downside to the book. For me anyway. I love the historical aspect though. Well worth the 1300 odd pages.
Posted by KarenSi at 04:12