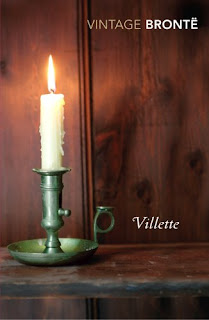 Lucy Snowe has spent much of her childhood with her God Mother. A kind lady who dotes on her son. Her last summer with them is the most memorable as they also have the company of a strange little girl, Paulina. When Lucy leaves them she puts the past behind her as she faces a future of loneliness and difficulty. After working as a companion to on old lady she heads Europe hoping for a teaching post. Once she reaches Villette she begins teaching at a school for young ladies. There she finds some new friends and strange characters. More importantly she finds some old friends she never thought she would see again.

Not quite as good as Jane Eyre but this book just reminds me of how much I love the Bronte sisters. I quite happily got lost in the pages of this book. Seriously didn't want to leave it. The language is simple and flows very easily. Or maybe it isn't as simple as it seems but is just so well written that it feels that way. Either way I enjoyed the writing as much as I enjoyed the story.

Lucy is rather an odd character even for the Bronte's. Odd as a main character that is. Not once do we get a full picture of who she is. We learn almost nothing about her family and her early childhood. We know that she has had to take on work beneath her station because she alone in the world. That's pretty much about it. Even as the book continues it is hard to pin down her character. She is different to each of the characters in the book. She is sweetness to her God Mother, charming to her God Brother and a little short tempered with her friend Ginevra. Her friends themselves are rather peculiar. M. Paul Emanuel is short tempered all the time and this temper comes out when seeing the littlest fault (in his eyes) in Lucy. I actually found him difficult to like until near the end and we got to hear more of his back story. Paulina was very odd. She didn't read like any normal 6 year old and was more likeable when we meet her again later on. Basically, what I thought of one character was subject to change.

I liked the story itself too. I liked the odd school which Lucy came to work for and I liked the ambition she held for herself and the determination to do well. I liked the fact that she continued her own studies just so that she wouldn't fail. Then of course there is the ghost haunting the school. I would have been disappointed if there hadn't been one and I was amused by the outcome of that.

Overall a lovely book which has reminded me that I need to one day read the rest of the books by these fantastic sisters.

I read this book as part of the classics challenge by Katherine of November's Autumn. This months (yep I have caught up with my reviews and am onto Septembers reads) prompt is about music and what fits the book. I do love music but I am hopeless when it comes to placing music with things. I would be a rubbish film maker. So I'm afraid I can't pick out a piece of music that would fit the book. Then Lucy is a closed off character I think it would be hard to find something that would fit her. If I had to it would probably be something light and classical. Just don't ask me what. It doesn't help that I don't listen to music while I read. I like both too much and usually want to concentrate on them. I can't concentrate on both at the same time so I tend to keep them separate.

Does anyone else pick out music to listen to whilst they are reading? Oh, and yes this book is another one of those vintage covers.
Posted by KarenSi at 02:08