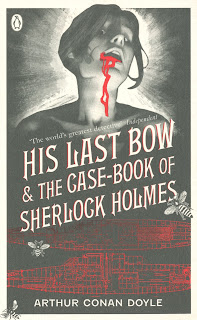 More short stories featuring the famous Sherlock Holmes. In this case the stories are two volumes brought together. Once again Watson has been diligently recording his friends most famous cases, including some that had previously been banned by Holmes from public viewing. We hear of Holmes' last case and what he does after he leaves London for the country. As it is approaching WWI when Watson publishes these there are a few that involved Holmes' protecting State secrets. He even heads into the world of the supernatural and uncovers the truth about a vampire. Lastly, after years of berating Watson, Holmes has a go at writing up one of his cases himself.

I am actually quite sad that I have now finished all these tales. True there is a new one out written by Anthony Horrowitz but somehow it won't be the same (that's not to say I won't try it). I feel like I am saying goodbye to am old friend here and yet I read the vast majority of these books this year.

I am more pleased with the way Holmes left his career this time than I would have been had Final Solution been the last story. Better to have Holmes still out there somewhere. In this case he is in the country bee-keeping. In fact there is one story in there after his so called retirement. Holmes has to write this one out himself since Watson isn't on hand to do it for him.

I think I enjoyed these short stories slightly more than all the others. Possibly because I knew they were the last and so prized them more. However, I think it's also because they were slightly darker. The tales always did have a dark edge to them but with the approaching war Doyle was able to move away from trivial problems to ones that put the country in danger. Only Holmes stood between Britain and disaster. I quite liked that edge to them.

Now that I have finished them all I can go on to the films and tv adaptations. I have been looking forward to those but wanted to hold off. It will be interesting to see how they compare. If you haven't read any of these books I recommend that you do. Especially, the short stories. Don't be put off if you aren't a fan of classics or crime. I think most readers would get something out of them. I dare you not to pick it up and fall in love with Holmes.
Posted by KarenSi at 12:04