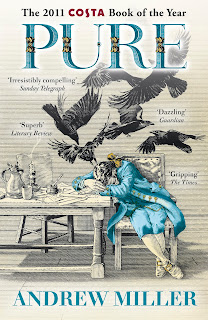 In the time just before the French Revolution a young engineer is looking to make his way up in the world. Jean-Baptiste Baratte has been called by one of the King's ministers for a special job. Baratte is to go to Paris to clear out Les Innocents Cemetery which has been poising that area of the city despite being closed. Not exactly a glamorous job but Baratte intends to do it well. What he didn't expect was people to be upset by his task. As well as overcoming the problem of how to clear the cemetery Baratte must overcome all the people who are against the destruction of the cemetery. For some it is part of their world. It's where they work and live.

I had been looking forward to this but after the first few chapters (which are short) I was less than overwhelmed. I thought it was going to be extremely dull. I thought it was going to be a book reflecting on the run up to the French Revolution. Instead it was droning on about a cemetery and one very naive engineer. Thankfully it picked up and political unrest was there in the background.

I disliked Baratte at first for his naivety. I cringed as he allowed people to take advantage of him. He was naive about his place in life too believing that he was finally moving up in the world. Just a little pompous without any real reason to be. It didn't last long mind you and it took a crack on the head for him to wake up to the real world.

As work on the cemetery finally begins the pace of the writing and the story picks up to. The pace of political unrest also picks up but again this seems to be more a part of the back ground. For the sake of Baratte, who had grown on me, I couldn't wait for the task to be finished. At the same time I didn't want it to be over as it would mean saying goodbye to some very interesting characters. Bit of a change from my feelings about the book at the start. It will never be my favourite historical fiction but it grew on me and it still hasn't left my head.
Posted by KarenSi at 09:00