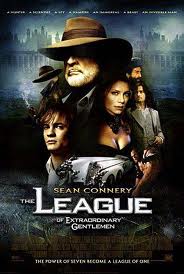 Bet you didn't think this post was every going to happen. Only been promising it for the last two months or so. However, I thought I would break up my review catch up a bit with this.

Way back in 2011 Hanna of Booking In Heels set up a challenge for 2012. The challenge was to read the books starring the characters from The League of Extraordinary Gentleman. Although not a film I enjoyed I am a fan of the genres most of the characters came from. It was basically a chance for me to re-read some old favourites and to try some new ones. Here is a list of the books I read with the main character highlighted. Have also linked the titles to my reviews of them.

Only nine books and most of them weren't that long. I read one each month which meant that I finished the challenge in September. I was going to read the graphic novel however I am having to be careful with the pennies and in the end it just didn't appeal to me.

Over all I enjoyed the challenge. It was fun to return to old favourites. I was particularly reminded of how much I love Dracula. I also enjoyed trying Jules Verne again. Oh, and I have loved visiting all the Sherlock books in the build up to the one listed here (of course I kept going with those after the challenge title had been read). I even discovered that a book I wasn't too fond of before that I actually quite enjoyed this time round (looking at you Phantom). I was also surprised that I liked The Invisible Man as H. G. Wells has been a hit or a miss with me over the last few years. The only book I disliked the first time and still do was Dorian Gray (please don't hate me Oscar fans). In fact it's the only book on the list that I disliked at all and it was the one that put me off the challenge. As time to read it got closer I started to struggle with the challenge and could see myself giving up. Thankfully that didn't happen.

Would be interested to here what others think of these books on the list. Big thank you to Hanna for running the challenge. It has been interesting.
Posted by KarenSi at 06:25