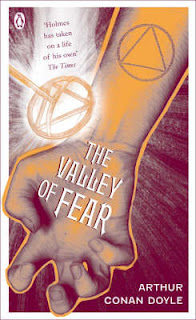 Sherlock is at home when he receives a letter from someone who works for Professor Moriarty. The letter is in code but it's not long before Sherlock has it all worked out. It's a warning that a Mr John Douglas is about to be murdered. He then receives a visit from Scotland Yard who come to deliver the news of John Douglas's death and ask him to come and unfold the mystery surrounding it. Holmes quickly agrees and travels to the Douglas home along with his good friend Watson. There they hear the stories of the dead mans wife, servant and friend. All the stories are the same and yet something doesn't quite add up. Of course it doesn't take Sherlock long to work out what exactly has gone on.

Supposedly not the best of the Holmes books. It's the last one that takes the form of a novella. However, it is criticised because Holmes is only in the first half of the book. Like the first two novella's Holmes uncovers the truth and then we get the back ground story of the individuals involved. In this case was travel back to America and a small town which is held in fear by a group belonging to the order, The Freemen (a play on the Freemasons).

Like in the previous two books I liked this division. It had a different style to it as we learn of John Douglas and how he became a hunted man. It was almost like reading a different book but at the same time you are constantly aware that it's about to reveal more of Holmes's initial mystery. I can agree that there wasn't enough of Holmes but at the same time I think the story would have lost something if this second section had been cut. It was very much part of the intrigue.

The parts of the book that did annoy me (very mildly) was when Moriarty was mentioned. The mystery must have been set before The Final Problem as the stand off between Moriarty and Holmes wasn't mentioned. Plus, according to Watson, this is the first he himself has heard of Moriarty. Yet, Watson was also first introduced to Moriarty in that short story. It was something I could live with and maybe my memory isn't as good and Watson had heard of Moriarty before the final stand off.

I still prefer the short stories but the novellas are still worth reading. It's an opportunity to see what else the author could do.
Posted by KarenSi at 12:12