Notes On A Scandal - Zoe Heller 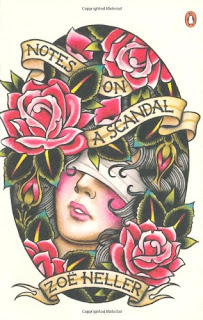 Barbara is a lonely single lady teaching history in a London school. She has  only her cat to share her life with. Sheba then joins the staff as a pottery teacher. This is her first teaching post and Barbara is fascinated in her and her life. Sheba little notices at first as she finds that her romantic view of teaching doesn't quite tally with reality. One boy takes an interest in art and Sheba immediately goes out of her way to help him. He alone makes her believe that teaching might not be a waste of time after all. Soon they strike up a forbidden relationship which could ruin the lives of both. Neither of them seem to care. When Barbara finds out she decides its her job to take note of all events so that her poor Sheba will not be vilified.

Before I go on to talk about the book I want to say a little about the cover.  I am always attracted to new book covers and last year Penguin brought out a new series of books called Penguin Ink. Penguin always seem to be bringing out fantastic new covers like this. This series of books are designed by Tattoo artists. I picked out two, this one and The Book Of Dave by Will Self. White Teeth would have went into the shopping cart too had I not already owned it. Notes On A Scandal was designed by Valerie Vargas who is a tattoo artist in London. Her inspiration is traditional tattoos. I'm not brave enough to get my own tattoo so instead I get to admire these books.

I think if it wasn't for this series of books I might never have picked up Notes On A Scandal. I'm glad I did as it was a fantastic book. A great last book for a great reading year. The idea that a 40 year old teacher would have a relationship with a 15 year old boy revolts me as I think it would any normal person. The fact that this teacher seemed a bit naive and that the boy was the one who appeared to push the relationship doesn't matter. It wasn't the creepiest part of the book though. If anything there are times you feel just a little sorry for Sheba. The creepiest part was Barbara who is writing Sheba's tale. Whilst she is putting out all the facts of Sheba and Connolly she puts her own thoughts and feelings in there. What you come away with is an old woman who isn't just lonely but also has stalker tendencies. We also saw that Sheba wasn't the first person that  Barbara potentially stalked. Sheba is just the first person whose situation led to Barbara having complete control over her.

For me that was the creepiest part of the story. It was subtly done too. At first you feel for poor Barbara. She is an older teacher who is a little set in her ways. She doesn't hold with new fangled teaching methods and as a result clashes with the head master quite a bit. She is clearly lonely. Her old friend no longer works at the school and she sees Sheba joining the team as an opportunity to make a new friend. She has little family and the cat is the only person who is happy to see her. You can't help but feel for her. It's not till half way through the book that there are hints that maybe there is a reason for that. Her old friend doesn't want anything to do with her and she had problems at her first school.

It was very well written. Barbara was very convincing as a narrator. Not once did the author make the relationship between Sheba and her pupil seem glamorous or exciting. Instead she was able to pull us away from the disgust of that to focus on Barbara and wonder just what she was up to. Very well done and a book that will stay with me for a long time I think.
Posted by KarenSi at 07:41