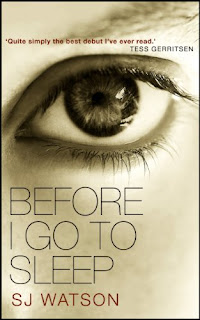 Christine wakes up one morning. She doesn't recognise the room she is in or the man that's in her bed. He is older than her usual tastes and believes she must have been partying harder than normal. Slightly embarrassed she leaves the room and heads for the bathroom. As she washes her hands she doesn't recognise them. They are older and then she looks up into the mirror to see a woman 20 years older than she used to be.

An Accident 20 years before leaves Christine unable to remember who she is every morning. Every day her husband has to tell her that she is married and then when she sleeps she loses her memory again. She has begun seeing a Doctor secretly who believes he can help. He encourages her to keep a journal and to read it every day in the hopes that it will bring back some memories. The one thing that is becoming clear is that the one person she has to trust with her memories is lying to her.

I was warned before I read this that it would be one that I would have trouble putting down and they were right. I read this in two sittings. It would have been one had I not been strict with myself (that was some serious will power). It was written from Christine's point of view so we are experiencing her confusion. We feel her distrust of her husband one minute and then her complete trust the next. As she has flashes of memory we know that there is more to what happened to her and to her life than her husband is willing to tell. He has his reasons but you feel as frustrated as Christine who just wants to know the truth. As time goes on though and the more she adds to her journal the more mixed up she is feeling to the point she doesn't know what is real and what isn't. As each new day begins she has to learn afresh and sometimes it's almost as if Christine is a different person as she takes what she reads differently each time.

I couldn't help but feel sorry for Christine. The idea of not remembering your life like that is horrifying and sadly some people do suffer from this condition. The author did some research and based Christine's condition on two different cases. To realise every day how many years you have lost must be devastating and I truly felt for the character. I think the author captured this aspect of it very well. Although I am not sure how realistic Christine's case is in terms of flashes of memory. Without that though there wouldn't have been a story.

The down side to it though is that it felt a tiny bit repetitive at times. When the character starts the day having to be told about her life it would be hard not to be. However, the author does manage it well and I was maybe only irritated by it once. For such a good read I can most certainly put up with one very minor irritation.
Posted by KarenSi at 23:28