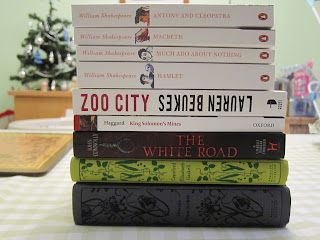 I decided that this year I was going to spend some of my Christmas money on books since I never get any for Christmas. I know, poor me. The truth is everyone is afraid to buy me books in case I have read them. I am sure most of you are the same. The good thing is that I get to pick out my own. Most of the books I bought were related to book challenges I had joined. I'm not going to bore you by listing which books belong to which challenge as I have mentioned them already in previous posts. Here is a list of what's in the photograph though.

Shockingly there is only one book in that pile that doesn't belong to a challenge and that's John Connolly. This is the fourth book in his crime series. I probably could have read them all by now but I am trying to savour them.

The two very pretty books at the bottom are Penguin Clothbounds. The truth is I could have gotten away with not buying them. I have plenty of classics sitting there that I could have read in place of Gaskell. Plus I have an electronic version of Dracula (I was shocked to discover during the clear out I had that I didn't actually have a physical copy of one of my favourite books). I couldn't resist treating myself to two of these beautiful books. I also realised during my clear out that I didn't own any Austen's other than P&P. I forgot it was my mum's copies I had originally read. When I decide which Austen I am going to re-read I have no doubt it will be one of these editions.
Posted by KarenSi at 08:17