In Which I Admit I Lied! 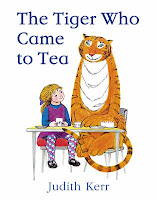 In yesterdays blog hop post I said that I didn't pay much attention to titles and that it didn't determine whether I picked up a book or not. I chose some tongue in cheek titles for my post. Having looked round what others posted I realised I lied. I have picked up many a book based on it's title and have done so ever since I was a child. I think only a few of them fit into the crazy category mind you and I think it's easy to see which.

One of the first books I am sure I would have picked for it's title (although I have no memory of it) is one of my childhood favourites "The Tiger Who Came To Tea". I don't think I need to explain why this is such a great title. I am sure I have talked at length about this book before and why I loved it. The second book that rang to mind was "When Hitler Stole Pink Rabbit". I do remember looking at it because of the title and I am sure I loaned it from the school library. For those of you who don't know this is a fictional biography of Judith Kerr and her family running from Hitler. It's wonderfully written and actually celebrates it's 50 years this year. The fact that it was the same author of my favourite picture book growing up was a pleasant surprise at the time. I think there are three books in total in this series.

"The Eyre Affair" by Jasper Fforde is another I picked up for it's title. Having read the back I discovered that Eyre was meant to be a reference to Jane Eyre. As you all have heard to death this is now one of my favourite book series. Another author you all know I love is Haruki Murakami. I am sure I have mentioned over and over again that I have read all his books and I am impatiently awaiting the next one. I forgot that it was the titles that attracted me to them as well as the covers. When I decided on which one to try first I went for the most bizarre, "Hard Boiled Wonderland and the End of the World". I think that would fall under the category of crazy title.

Quite a few people listed some fantastic paranormal titles. I admit that I have read quite a few books in this range. I do quite like Kelley Armstrong and I went through a phase where I read this, YA and little else. One series I liked was by Kim Harrison and I have to admit that it was the titles that intrigued me. The first one is called "Dead Witch Walking" but I think my favourite was a play on a Clint Eastwood film "The Good, The Bad and the Undead". I haven't read any from this series for quite a while.

More recently I have picked up "When God Was A Rabbit" by Sarah Winman which is one of my favourite books this year. Such a lovely story. Again it was the title that attracted me although the pretty cover and others reviews clinched it for me. I also read "Ilium" by Dan Sims for the same reason I read "The Eyre Affair". It's a play on another book. In fact most of the book is set around a reconstruction of the Iliad. It actually got me to read the Iliad (as well as a readalong) which was a book that I found daunting and in the end very much enjoyed. For that reason I have "Penelopiad" by Margaret Atwood (another favourite author) on my TR list although I want to read "The Odyssey" first.

Lastly I have read a couple of books simply because of their crazy titles and no other reason at all. A good few years ago I read "The Hollow Chocolate Bunnies of the Apocalypse" by Robert Rankin. It was funny although it had a similar theme to Jasper Fforde. Actually all of Rankin's novels have crazy titles although this is the only one I have read. Most of them are a play on cult films. They are worth checking out. I think probably the last book I read just for it's crazy titles was "Pride and Prejudice and Zombies". It was quite funny and I thought the whole book was as quirky as it's title. Sadly the market has been flooded with similar books. I think it takes the quirkiness and originality away.

So, have you ever picked up a book based on it's title alone?
Posted by KarenSi at 01:55