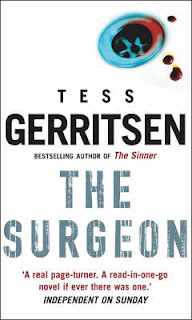 Someone is stalking women and killing them in a horrific manner. Whilst awake he cuts them open and removes their Uterus. Only after that does he put them out there misery. Detective Thomas Moore and Jane Rizzoli are on the case but there are things about the case which don't add up. Like the killers fascination with surgeon Dr Catherine Cordell. It's all somehow linked to her and her survival of an attack in another city two years earlier.

I like to think I have read enough horror and some crime to not be phased by the more unpleasant descriptions. I wouldn't say I was completely acclimatised to them but even when I am shocked or a little revolted it doesn't bother me too much. So well done to Tess Gerritsen who managed to make me want to put the book down for sheer description alone. There is a chapter near the start of the book which describes in great detail what some of the victims went through at the hands of this killer. I could almost feel just how traumatised these fictional victims must have felt. It was not pleasant and yet I had to read on.

This book played more on what the women went through and how Cordell was reacting to the situation rather than on the investigation by the detectives. In fact the detectives had only a small part in the book (or at least smaller than I would have expected) other than their relation to Cordell. Moore is getting over the death of his wife and feels protective of Cordell. Rizzoli distrusts most of her male colleagues and feels the need to constantly prove herself. She feels that Cordell has tainted the one male detective she respected and trusted. Actually we see Moore doing most of the detecting but it still felt to me that it was mostly from Cordell's point of view.

There is a reason why this surprises me. This book is the first in a series starring Rizzoli and another character, Myra Isles. If Myra was mentioned at all in the book it was so fleetingly that I missed it. Rizzoli was of course there and some of the clues was found by her but she still didn't have that big a part in it. In fact she came across as quite a bitter character. With good reason mind you but this bitterness doesn't really endear her to the reader. Thank goodness for Moore who comes across as both warm and professional. There is more from his point of view than Rizzoli's yet I get the impression this book is the last we will see of him.

That's not to say that I didn't like the book because I did. Maybe the author hadn't intended it to become a series in the first place. I liked the fact that Cordell was portrayed as a women who recovered from a horrendous crime and came out stronger in the end. Not that she didn't suffer but she got on with life and fought to keep that life. I also liked the thriller aspect too. It was different from the few crime books that I have read. Although we saw inside the killers mind a few times we still got very few hints and tips as to who he is or was until we were approaching the end. It made working out who he was difficult and even then I only ever figured out how he may have had access to Cordell. At the point I am pretty sure I was supposed to. There were parts of the ending that I found a little frustrating. Such as how the killer came to be this way but again we were supposed to feel that was as that's the way the detectives and Cordell would have felt.

I bought this a few years ago which is why I chose it for the "Books I Should Have Read By Now Challenge". I actually bought it on a whim as none of my crime reading friends or family had read Gerritsen. Glad I did as I did enjoy it. I can see myself reading more. Not just because I liked this one but because I am interested in seeing how the author introduces the second main character and turns Rizzoli into a character worthy of a series.
Posted by KarenSi at 13:11

Email ThisBlogThis!Share to TwitterShare to FacebookShare to Pinterest
Labels: Book Review, Books I Should Have Read By Now Challenge, crime, Tess Gerritsen