The Bonesetter's Daughter by Amy Tan 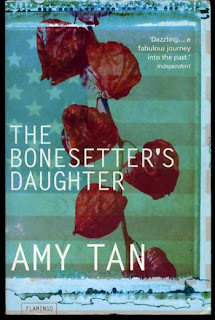 Ruth spends her life trying not to rock the boat. She just wants to be happy and to keep everyone in her life happy. For that reason everyone but herself comes first. Recently though it's beginning to grate on her just how much she is taken for granted in her work and in her personal life. Slowly she can feel things slipping away from her and she's not sure how to fix it. Her mother is another worry. Ruth has spent her life translating for her mother but lately what she says is so bizarre that even Ruth can't understand it. She mixes up her birth date and then is adamant that her nurse maid is really her mother. Whilst Ruth looks after her she finds some papers her mother had written. Already worried that her memories were leaving her she wrote down her true life story starting the nurse maid she claims was her mother.

I came away with mixed feelings about this book. First of all my expectations were extremely high. I read "The Joy Luck Club" years ago and I can still remember how much I loved it. I was expecting the same feelings with this book. When that didn't happen instantly I was already disappointed and reading the book seemed like a bit of a chore. Add to that fact that I didn't particularly like Ruth. She was a bit of a doormat and I found it very difficult to sympathise with her.

The second part of the book is the life story of Ruth's mother, LuLing. It's revealed here that she isn't crazy after all and in fact had a very sad early life. This section of the book proved to be far more interesting. LuLing was far more likeable. More strong willed than her daughter and certainly more determined. She had her share of heart breaks which gives some insight into her depression later in life. There is a mirror between LuLing's relationship with her nursemaid and Ruth's relationship with LuLing. They both translated for their mother's and refused to do so when they were feeling frustrated and hard done by. Other reasons for liking this section is that it was more exciting. So much more happened in these pages that made me want to go on. We already know that LuLing ends up in America but we don't really know how she ended up there. It was quite a good story.

The third part was better for the second. Ruth was more likeable because she found new respect and more understanding for her mother. I don't think she quite learned to speak up for herself mind you and that was a little frustrating. I would have liked for her to turn around and do something for herself.

Overall I did enjoy it. Like The Joy Luck Club it is essential about the relationship between mother and daughter. However, that could still all have been in there had the second stood alone as the book. I think I would have liked it more if it had.
Posted by KarenSi at 14:09