The Woman In White - Wilkie Collins 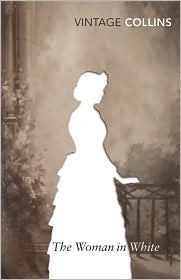 Walter Hartright sets out to his new position as drawing master with a very wealthy family. On the way he comes across a mysterious lady dressed all in white. Being a gentleman he of course helps her in her hour of distress only to discover that she has some connection with the family who has engaged him. He arrives in Limmeridge and immediately is taken with the two sisters, Marian and Laura. Together they set out to discover who the lady in white is and why she is in trouble. Matters become more confusing as Laura's betrothed seems to be hiding something concerning this mysterious lady. Walter, Marian and Laura set out to discover the truth but Sir Precival Glyde and his good friend Count Fosco aren't going to make it easy for them. They have a plot up their sleeve and their future depends on it succeeding.

I mention in Mondays post that I was loving this book. I was sure that by the end it would be my favourite classic. I don't know if it quite beats some of those others but it is certainly up there. From the start we are made to feel a sense of foreboding. The narrator, Walter, clearly states that he is writing in order to collect together evidence of events surrounding the woman in white and Percival Glyde. We know straight away something has happened. This tension is increased mere pages later when he comes across the lady and helps to rescue her from an asylum. This tension never goes away. We are well aware that there is a secret to be told and we are kept in the dark for about three quarters of the book. It's not just the secret though. There is the added feeling that Marian and Laura are in danger. The scenes with them trapped in Percival's house with no way of communicating to the outside world and no way of escaping were some of the best.

It did slow down a little. I was able to eventually guess the secret although not long before it was revealed. The tension was kept up simply because of the plot against the sisters. The last quarter of the book was this part coming to a head. Here it felt a little slow because we knew the secret, we knew the plot and we were just now waiting for the ends to be tied together. I think this was the only part of the whole book which let it down. Having said that though it was still enjoyed reading it and I would have been sorry had it ended any other way. Possibly a good thing too. As I said in my last post I wasn't able to read it any quicker than I did because of that tension alone. It was almost too much (in a good way). If I had sat and read it for longer periods of time I would have struggled not to flick ahead to see how it turned out because I HAD to know. Thankfully I was distracted by real life too much to put my will power to the test.

I greatly enjoyed the characters. I particularly like Marian. A strong female character for that period. Strong in the sense that she sees herself just as capable as any man. Of course this means she is likely to end up a spinster. I am willing to let that part go just because she was so good. I liked the fact that she put herself in all kinds of danger in order to protect the ones she loved. Her sister was the opposite. Weak and vulnerable and very much in need of protecting. At times this was very irritating especially when she seemed rather childlike. It helped in the story though and I guess books can't always be filled to the gunnels with strong females. Besides Collins didn't discriminate either. There was a extremely weak male character in the shape of Laura's uncle. Funny how I found him entertaining though.

The one thing I love about literature from that era is the power of description. I love contemporary fiction but when it comes to setting a scene and mood classics from that time seem to have the edge. Possibly it's the language that allows the author to go over the top with description. I know in more recent books I would have found this to off putting. There is such a thing as too much but in this case it was just right. This just added to the edginess I felt as I read it.

I have seen this book on so many top 100 lists but I rarely gave the author or title a second thought. It just didn't appeal to me and how wrong I was about that. I first came across Collins as a possible author to try when I read "The Suspicions of Mr. Whicher" by Kate Summerscale. A book about a murder investigation which set the literary world all a twitter. Apparently inspired Collins and Charles Dickens. It was then I thought to give the book a try but still took me far too long to pick it up. I actually in the end chose it as my classic book for this month because I didn't much feel like any of the others I had there. Plus how lovely is the cover? Once again a vintage classics design.
Posted by KarenSi at 14:20