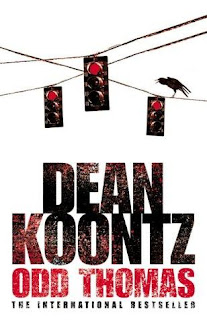 Odd Thomas lives up to his name. He is a little Odd, a harmless eccentric to the people who don't really know him in his own town. Being born with his gift being Odd is understandable. He can see dead people. He can't hear them and so has to use his intuition to discover what it is they need from him. The rest of the time he is a fry cook and boyfriend of the lovely Stormy. On August 14th he is working in the kitchens when a strange man enters the cafe. His food order is strangely large but there is something about him that gives Odd Thomas a bad vibe. Something is going to happen in the town and it centers round this creepy man. Odd believes that he has to do something to stop him or many people will die.

I got into Dean Koontz round about the same time I started reading Stephen King. Even then I knew they weren't in the same league but I still enjoyed reading Koontz. He was at the lighter range of horror which can be a nice change. I eventually stopped reading them though and I certainly didn't feel the need to read his entire back catalog because all of his characters started to feel the same to me. They all ran into one another and I couldn't honestly remember the names of the main characters in the books that I had read months after reading it. I picked this one up because it was recommended to me as a Halloween read. It's been years since I have read any of his books and I did actually like the fact that it was the first in a series starring this one character (plus with the name Odd Thomas I am not likely to forget). So, I was actually looking forward to it.

I very much wanted to like the book and not just for old times sake. I liked Odd Thomas. He was a sweet if rather strange guy. I liked his out look on life even if he did seem a little naive at times. Definitely likable which showed in the fact that everyone in town seemed to love him if not understand him. The first and main problem I had with the book is the first person narrative. It was great because I got to see they way Odd worked and what he thought. However, he did have a tendency to wonder off the point. From the first few pages I would find I had read a page and not taken anything in because my mind started to wonder. I would go back and re-read it only to find that I didn't need to bother. What I had missed had nothing to do with the story at hand. I felt that there was a lot of that in there. Plus a lot of repetition in there too. I don't know how many times we heard that Granny Sugars used to like to gamble or that Odd's dad was trying to send land on the moon.

The plot itself I felt was a little weak. Most of it was chasing round one guy and then nothing really happened until the end. All of a sudden a satanic cult was involved and the detail in that was light until the end too. The fact that Odd can see something called baldocks was interesting but in the end they didn't really have much to do with what Odd was trying to prevent. Although I can see that they might have a part to play in another book. Odd also experienced something supernatural in the house of the stranger but again it had no real part to play in the plot. We never really found out how or why it happened other than some guess work made by Odd. I have to admit that I spent most of the book impatiently waiting for the story to move along.

As much as I liked Odd as a character I don't think I will be reading any more of these books. I am actually a little sad about that because I really did like him. Oh, and as a Halloween read I would give it a big zero. Wasn't scared for a minute and I am a bit of a wimp.
Posted by KarenSi at 06:28