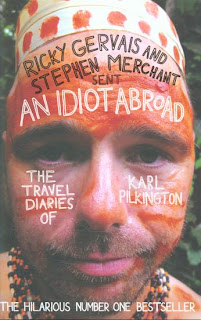 Karl Pilkington is friends with Ricky Gervais and as a result he spends his life being mocked by him. Mainly for his oddly round head. Pilkington is not and adventurer or a traveler. He knows what he likes and he would rather it stayed that way. Friends Ricky and Stephen decide this is the perfect way to poke some fun at him and make a TV programme at the same time. So they send him round the world to visit the 7 wonders, force him to stay in hovels and to take part in tasks he would rather not do. This book is a diary of those events.

I am actually not a fan of Ricky Gervais. I am probably the only person in the world who is unable to watch him without wanting to hurl something at the television. Famed for his amusing arrogance which actually just sets my teeth on edge. Despite that I clearly have a bit of a sadistic side because every time he appears on TV with Pilkington I find him hilarious. Really I am laughing at Pilkington and I should probably feel bad about that but he does have some of the most insane ideas. Some of which actually scarily make sense.

Anyways, that's my round about reason for picking up this book. The truth is I probably should have just watched the show. It probably would have been funnier. Oh, the book did get a few laughs but not enough to make me say this man is hilarious. Instead it was filled with a few laughs, lots of complaints about toilets interrupted by annoying conversations with Gervais.

This might actually be my shortest review as I don't think there was much more to add about the book. Unlike most travel books he didn't inspire fascination for the places he was visiting. It was a nice distraction but not worth buying the book for. I am curious about his other books though and wonder if maybe they will be a little funnier.
Posted by KarenSi at 13:27