How To Be A Woman - Caitlin Moran 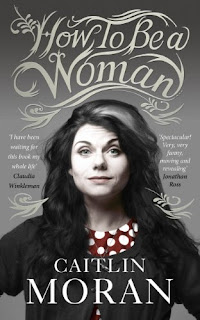 At the age of 13 Caitlin Moran discovered with great horror that she will have no choice but to go through puberty and become a woman. It wasn't a choice. From then on it was an adventure to discover exactly what it means to be a woman for her. Something that changed constantly through out her life. It took falling for losers, working with sexists, living on her own with no money, learning not to follow the glossy magazines, marriage and motherhood to discover the answer to this. Through out all of this she maintains a strong feminist view point and still manages to be herself.

I actually suggested this book for my book group when it was first about to be published. It was vetoed simply because only a few of us were in the mood for non fiction. A number though did go out and buy it simply for the blurb that I had printed out. It wasn't actually what I was expecting though. Various websites had it advertised as more of a humour title and so that was what I was expecting. I was expecting to be howling with laughter. I did laugh but not enough for everyone else on the bus to look at me as though I am a lunatic. Whilst a humorous tone was maintained through out the book the main theme was feminism (of which I did expect a little).

Moran believes that all women are feminists whether they are active or not. If they believe that they should chose how they live their lives and that they should be treated with respect both at home and at work then they are feminists. I myself have always classed myself as one without being particularly active (active in militant terms). This book confirmed my view of it. I am sure the point that Moran put across in her book is not new. I haven't exactly went out of my way to read any books on the subject and so my knowledge of it is low. I liked the view that being a feminist doesn't have to be about man hating and bra burning (I don't hate men and I love my bra). I think that's probably the dated view and certainly closer to militant feminism. Instead she puts forward the idea that feminism is just wanting to be treated the same. To want an equal share and say in the world as men do. To be respected and of course for us in turn to be respectful back. To   not conform to what society says we should be if we don't want to. Basically to be happy in ourselves.

Which brings me on to some other aspects of the book I liked. She talks about the view of women that fashion and the media portray. Or at least the way they show what women should be. Like almost all of us have done she has tried to follow some of this. When she realised it didn't work for her she put her foot down and said no more. The one that I can completely relate to is high heels. I hate them with a passion. Moran explained in one chapter that she has umpteen pairs of heels collecting dust because in reality they kill her feet and she can't walk in them. She's given up trying. I am exactly the same. I can't walk in them and shoes in general always seem to want to destroy my feet until after weeks for breaking them in. Heels never feel broken in and by the end of the night I am usually bleeding to death and unable to walk (slight exaggeration but not by much). Like Moran I gave up on heels long ago but not completely. Every so often the dust will be blown off and I will torture myself for an evening. My last attempt (on my birthday) lead to one very sore ankle that I couldn't walk on for days. It will be my last. I want comfy but pretty shoes.

Moran is also very open about all aspects of her life in this book. There are some that I can see some people would find shocking depending on your political views. I would say that if you are very conservative then you aren't going to enjoy this. But, it is always good to keep an open mind to other people's point of view.

Over all it was a fairly entertaining read. I am still reading one of the books I listed last week but that got pushed to the side when I started reading this. Like I said it wasn't what I expected but I think that's a good thing in this case.
Posted by KarenSi at 06:26