Silent In The Grave - Deanna Raybourn 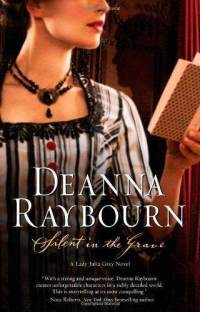 The death of Julia's husband was sudden although not unexpected since his whole family die young from heart conditions. So when Mr Brisbane suggests murder Julia is shocked and doesn't believe a word of it. She spends the next year getting used to being in mourning as befits a lady of her station and looks forward to ridding herself of her widows weeds. Round about then she clears some of Edwards things and finds a rather threatening letter. Maybe Mr Brisbane was right after all. Convinced that Edwards death might not have been natural after all she begs Brisbane to take up the investigation once again. He agrees but to his horror/amusement Julia insists on helping. Little does she realise the danger it will put her in nor how it will possible taint her reputation.

Gabe of Gabriel reads recommended this book months back. I finally picked it up last week when I needed something lighter to read. It was the perfect choice. Silent In The Grave made for an entertaining and yet light read. The author clearly has an obsession with the British Victorian period and indeed the author blurb confirms that. It was almost as though she was using the book to prove to us how much she knows about the era. As a result she seemed to be trying too hard to ensure authenticity. There was too much focus on rituals, proprieties and station. Almost as though the author was trying to hammer home the fact that she is an expert of the period.

Despite that it didn't spoil it for me. I enjoyed the story. It wasn't too taxing and I did like Julia and her family. I especially liked the idea that her family are known to be non conformists. I did get the impression in the first few pages that her father was going to be one of these tyrants but I couldn't have been more wrong. Instead he encourages his children to be bold, especially his daughters.

I was worried about the romance side. Most of you will know that I don't really do romance. I have seen this series of books classified as more romance than crime. I worried for nothing though. Other than some tension between Julia and Brisbane there wasn't much in the way of romance. Perhaps this changes later in the series but for now I am happy to read on. Will definitely be reading more of these books.
Posted by KarenSi at 23:26