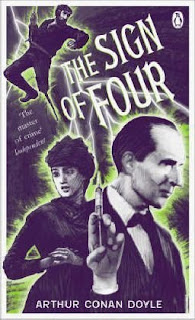 Sherlock Holmes is bored for lack of a case and poor Watson is worried about him and his drug use. However, just when Watson is confronting him about it a case worthy of his attention lands on his lap. A young lady has been receiving pearls annually since the death of her poor father. A note then arrives at her door to say that if she were to meet the stranger he would tell her of the injustice done by her. Sherlock and Watson volunteer to go with her. There they discover that the brother of the note writer has been murdered with a card left behind revealing the sign of the four. Believed to be the victim of a uncouth looking man from his days in India that somehow involves the girls father. Sherlock is on the case meanwhile poor Watson is smitten.

When I gave my month overview this book completely slipped my mind. This is what happens when I let myself get so far behind in my book reviews. How could I have forgotten this wonderful book? I was a little shocked by the start of it. Sherlock's drug habit out of boredom surprised me. I haven't seen any of the television series or films so you will have to forgive my ignorance. Supposedly it humanises him, gives him a flaw but it didn't do that for me.

Anyways, despite that it was another fantastic tale. By now Sherlock and Watson are now used to each others ways. Watson no longer has any doubt as to the brilliance of Sherlock and is entirely trusting of his ability to solve any case. There wasn't really much to solve in terms of who did it since that is revealed to us quite quickly. It's the why that is the real problem solver. Like the last book once Sherlock has his man it reflects to the time when the problems between murderer and victim first began. In this case during the days where the victim was am officer in India.

Very well done and the reflection in India kept it interesting. There was even a touch of romance in there (just to prove I am not a complete cynic). I have the third book sitting waiting on me which I will hopefully get to soon.
Posted by KarenSi at 23:34