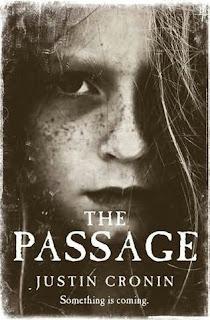 A secret branch of the US army has bee experimenting with a virus in the hopes of creating the ultimate soldier. The virus prevents illness and increases various abilities. Unfortunately, that's not all it does. All twelve of the men who have been infected have turned into monsters. They can manipulate those caring for them and eventually get free and passing on the virus to those they bite. Soon the virus is spreading and those who aren't killed are turned into what the survivors call smokes. Peter, from one small colony of humans, believes that their only hope is a girl who has been wondering the US for 100 years now. The smokes don't touch her and she seems to have some very strange abilities.

I had high expectations of this book before it was even published. I am glad to say that not only did it not disappoint, for me anyway, it exceeded those expectations. This isn't just your normal vampire tale. Yes, vampirism being a virus is hardly new but it was more than that. It was also a dystopian novel. Whilst I love a good vampire story dystopian trumps vampire any day.

The first third of the book is set not long from now. It sets up the story giving background into those infected by the virus and how it got loose. Completely necessary but I felt a little frustrated by it. I wanted the story to move on. I think though that it had more to do with my being so busy at the time and was unable to spend as much time reading it as I would have liked. So there is my first piece of advice. If you do decide to read this book then make sure you have plenty of time to sit and enjoy it. This section actually reminded me of Stephen King because of the way he built it up and went into such detail about each of the characters. I have since read that it's been compared to King's "The Stand" which just happens to be my favourite King book.

After this section the book jumps almost a hundred years to one small colony of survivors who may be facing the end. This is where I lost the feeling of a King book and this is where I truly began to love it. It was so completely different from the first third it felt like a different book. The walker, Amy makes an appearance and one of the colonists, Peter, believes that she holds the key to their survival. From this point there was so many different twists and turns I found it difficult to put down. I even caught myself shouting no when something happened to a character I had grown fond of.

I loved the fact that the vampires weren't really your atypical supernatural beings. As the plot develops we do learn a lot more about them. Some things that would surprise you and they do share some of characteristics to your standard vampire (other than the blood drinking though I am not telling). I also found myself feeling sympathetic towards them which I think was what the author was wanting. That doesn't make it any less scary though and there was one scene set in LA that I thought might cause me to put the book in the freezer.

This book is definitely going on my list of favourite books read this year. I am just gutted that I have to wait until the second part of the trilogy. I should warn you that this author is mean and ended his book on a cliffhanger.
Posted by KarenSi at 02:04