The Story Of Martha - Dan Abnett 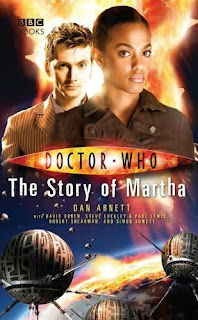 The Doctor is a prisoner of the Master and the Earth is held prisoner by him with the help of the tochlofane. The Master also has Jack and her family and there is nothing Martha can do. Reluctantly she leaves them behind on the Valiant but she will be back. She has a year. A year to travel the world and help save the Doctor and her family. A year to bring down the master and she has to do this on her own.

Yep, I am a geek and I proudly wear my geek badge for all to see. I have loved Doctor Who since I was a child thanks to my parents who would by the classics on VHS. I rarely read the books though as they usually aren't that good. Occasionally I will pick one up if the story interests me. This one did. I thought it was a fantastic idea to write Martha's tales of her travelling the Earth and trying to get everyone to believe in the Doctor. Once again though it was a little disappointing. It follows Martha over the first six months and that's split with tales of her travels with the Doctor, tales she is telling survivors.

Details of Martha being with the underground come from when she is just arriving or just leaving. She is being followed by a human working for the master which could have been interesting but that too follows a similar pattern. He arrives either too late or has been deliberately misdirected. That is until they reach Japan and something is wrong there that isn't the work of the Master. Martha and this man are forced to work together very briefly. Again that could have been interesting but this was just the last chapter of the book. The last two pages jumps six months to her returning to the UK.

I think this book had such great potential, or the idea did anyway and it failed. There could have been more focus on Martha's travels and human survival which is what I thought it was going to be about. It wasn't that bad though. It was an easy read which was why I decided to use it as my travelling book last week. I would have found it mildly entertaining had I not expected more from it.
Posted by KarenSi at 00:14