Did You Miss Me? - Karen Rose 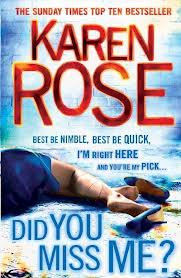 Daphne Montgomery in her new position is just finishing up her first big case. Convicting a man for murdering two people in their car. Since this is a race hate crime there is a lot of focus on it. The family have a lot of backing and Daphne has every right to fear for the safety of herself and her loved ones. Whilst in court Daphne's 20 year old son has been discovered to be missing along with his girlfriend. His bodyguard is found dead in an ally. It would be only natural to believe that the current case has something to do with it. But does it or is it because of something that happened to Daphne long ago? FBI agent, Joseph Carter believes there is more to it and is determined to protect Daphne and get her son back.

I said in my review of the book previous to this that I knew who the next couple were going to be. I was wrong but I still see a story for them coming up. This book has me more convinced than ever.The couple that it did focus on just didn't do anything for me. Both seemed completely different from their first appearance. I maybe would have liked them better if they had continued as they were. Instead I found it difficult to like them. Not that they were horrible people but just that they seemed more than a little two dimensional. I found it hard to engage with them and to feel for them or even root for them. In fact I didn't feel anything for them. I nothing them (if that makes sense).

Perhaps I am just bored with the formula of these books. They are all the same it's just the plot that differs each time. Woman is in danger. Man helps save woman. Both have dark secrets which make them two scared to act on the fact that they fancy the pants off each other. They get over it. Solve the case. Live happily ever after. I didn't mind the formula before now. It was after all the only romance I would really go near (classics don't count). Plus the murdery bit was usually enough to keep me going (I am Scottish after all and we do love our murder books). Not this time. This time it was more than a little far fetched or rather tenuous. Sadly I can't really explain that link without spoiling it.

I thought it was just me but the friend who got me reading Karen Rose in the first place didn't like this book either. This is her 14th book so maybe she is bored with he formula too. I haven't had a chance to talk to her about it. For me anyway this is the last one. I don't even want to go back to read the others that I have missed in the middle. I will just have to find another light murdery read for when I am stressed or busy.
Posted by KarenSi at 04:32