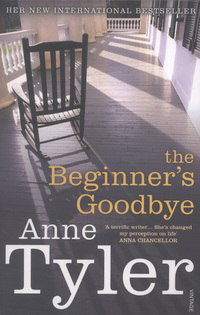 Aaron Woolcroft has always had people in his life wanting to look after him. When he met his wife Dorothy she was a breath of fresh air. She gave him the Independence he craved. When she died he became lost but still didn't want the help of others. All he wanted was his wife back. An editor in a firm famous for it's beginner book series Aaron believes that he could benefit from a beginner's guide to get over the death of a loved one. As his wife returns to him in unexpected moments it lets him see that his life with her was maybe not as perfect as he had thought and that maybe it's time to let her go.

I quite liked Aaron. I usually do like Tyler's main characters even with their flaws. Then flaws are what make characters and separate them from the Mary-Sues of fiction. With Aaron his disabilities are not his flaws. That's just a part of him. The fact that he believes that the people who love him can't see beyond his disability and want to smother him is his flaw. With this belief he is pushing everyone away from him.

Again, like most of Tyler's books all the characters had their own flaws too and I like each of them for it. Even Dorothy who seemed to have been a woman who had been difficult to like. Having said that it wasn't enough. There was something missing from this book that the other Tyler books that I have read have. I don't know what that something is but this book just didn't do it for me.

I liked the characters, I liked the story but I don't think enough went into it. It was a very short easy read. I usually do find her books easy to read but this was almost too easy. Not in terms of language, the language was fine. It's one of those stories in a few months I will vaguely remember reading but won't remember much about the story. As sad as the story was it's not going to stay with me.

That's not to say it's the worst book I have ever read. Far from it. I still enjoyed it. I just think this one has nothing on Tyler's other books.
Posted by KarenSi at 08:23