The Woman Who Died A Lot - Jasper Fforde 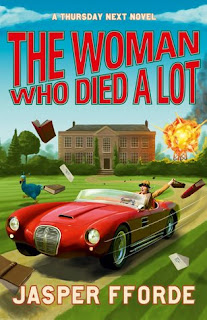 Thursday Next is still recovering from her assassination attempt. She's getting on in years, has a dodgy hip and is still trying to remember that she doesn't have a daughter called Jenny. Despite all her problems Thursday is still hoping to keep in the thick of it but is instead relegated to be the head of all libraries. You would think that would mean a quite life but Goliath are still out to get her, her son might or might not murder someone on Friday and someone keeps replacing her with fake Thursdays. Oh, and lets not forget that Swindon might face all destruction on Friday as God has decided that it's next on his smiting list. He's a tad angry that Thursdays brother proved his existence.

I am going to admit that when I started this and realised that no part of this book was going to be in the book world I was more than a little disappointed. Especially when you discover that Thursdays injuries from her last exploits prevent her from going there. How could this book possibly hold any interest for me now? I needn't have worried as it still had plenty of laughs and book related humour.

In any other book series a fraction of this plot would have seemed ridiculous. Lets face it. How many of you would shake your head at God's existence being proved and so he starts smiting parts of the world in a timely manner. Never mind the fact that Thursday's brother is the reason behind it and the fact that he has proved it sort of brought God into existence in the first place. Something like there being lots of believers and so he exists. My mind is going cross eyed thinking about it. It works though and the whole smiting thing does have something to do with Thursday herself. Plus whilst it's essential to the plot it's only one part of it.

We then have another mind-twisty moment where Friday is no longer going to save the world a million times over as he becomes the leader of the chronoguard (people in charge of time travel). When they could no longer prove that time travel was ever invented time travel stopped and all the people who worked for and will work for chronoguard are give alternate life stories. Again this is central to the plot but only a small part of it.

There is also a teenage love affair, evidence of where lost stories go, replacement Thursdays all over the place and dodo experiments. Two of my favourites though have very little to do with the central story but they amused me no end. The first is a nutty Enid Blytonist who wants Blyton's stories protected to the point of being a little fascist about it. The second was the mention of Daleks. Sorry, anything that mentions Daleks has my vote.

I loved every page of this book and once again I can't wait until the next one. On that note I am going to leave you with a picture of Daleks. Just because. 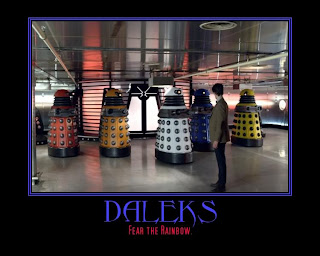