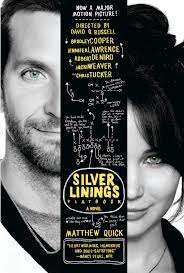 Pat has just gotten out of hospital and is now living with his parents. He doesn't know why he was in hospital. He just knows that he has done something to upset his wife. In order to be reunited with her he believes he has to prove himself to her. The only way he can do that is to keep a diary that details his life since he left hospital and until he reunites with her. Meanwhile he tries his best to get his life in order. He spends the bulk of his time exercising or trying to connect with his father through football. Instead he builds connections with a lot of unexpected people. Including Tiffany, his friends sister in law, who is trying to recover from the death of her husband.

I picked this book up after reading FBT's review over at Kill Me If I Stop. I have to admit I had wanted to see the film but I am glad I didn't as, going by that review, it would have irritated me. As FBT says the book gives nothing away until the end. The film gives everything away at the start. An example of why some people should just leave books alone.

Anyway, back to the book. The language of the book was fairly simple and Pat was an engaging character. You knew there was a reason why he wasn't going to see his wife (and probably wouldn't) but like I said you didn't find that out until the end. That doesn't stop you for routing for him. You want him to have his happy ending so badly. He did everything he could to prove himself. I particularly enjoyed his views on some of the books his wife had tried to get him to read in the past. By the way if you haven't read any of these classics they will be spoiled for you (I'll list them at the end). Luckily I had read most of them and knew the story lines to the ones I hadn't read. What was interesting was that his take on them were skewed by his own belief that life should have a happy ending (or a silver lining).

I should warn you that there is also quite a lot of American football talk in the book. Pat's family are huge football fans and it's the only way Pat can seem to find any connection to his father who otherwise refuses to acknowledge his existence. It's quite heartbreaking to read Pat's attempts being brushed off again and again and yet he doesn't give up. I am far from being a sport fan but I actually enjoyed most of it. I liked the feeling of connection it gave Pat to his brother, old friends and even new friends.

Then there is Tiffany. She's quite a strange character but there is a reason behind her strangeness. It's all linked to her trying to overcome the death of her husband (and failing). She unexpectedly finds herself drawn to Pat to the extent she begins to stalk him whilst he takes his runs.

I loved this book. It was funny and sad and moving and just a good read. I understand that Pat was supposed to be bipolar but it didn't come across as that to me. Instead I have my own theories but alas I can't share without spoiling. I definitely recommend the book and I also recommending reading FBT's review. Oh, and I hate film tie-in covers but it was either that or wait to get the book. Being impatient I chose  to go with this cover.