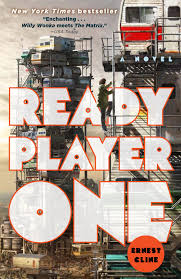 The Earth is one big disaster zone. For years we had been warned that we were destroying the planet and by 2044 we have finally gone and done it. Travel is now only for the rich with the majority of the population living off food stamps and in poverty. OASIS is the only refuge for most people. A virtual reality where you can make the world what you want it. Think of SecondLife or the Sims but you are in there seeing that world around you. For Wade Watts that's his escape and his only means of an education. He's also a gunter. The inventor of OASIS died five years before and left easter egg clues around his creation. Whoever finds them all gains ownership of his estate which includes this virtual world. For Wade it seems the only way he will escape his world but his resources are limited. So it's a surprise that he is the first to find the first egg. There is a friendly rivalry between himself and some fellow gunters but it gets series when a corporation intent on making OASIS theirs steps in.

I am actually a little sad to be reviewing this book. It's good to share but at the same time it also means that I have well and truly finished this book. Yes, I can go back and read it again but the second time isn't always the same as the first. The first is special even if you do discover more the second time. Anyways I am biting the bullet because if I don't you will have another two weeks of nothing but It's Monday.

So what you may not know about me (although I haven't hidden it very well) is that I am a big geek. I love my sci fi and there are some things that take me to my geeky happy place where I geek out. This was one of them. I was geeking out from page to page. For the owner of OASIS, the guy who died, was a bigger geek than I am. He was also a genius (which I am not, I am sure I haven't hidden that very well either). In order for these people to uncover the easter eggs they had to reveal some clues. Each of them are linked into things the owner loves which is quite a large number of things in the geek universe. There seems to be very little he didn't like sci fi shows, games, rpg games, games and anything from the 80's. As you can imagine these constant references were the reason I was in geek nirvana. I even discovered, to my horror, that my disdain for all things 80's was actually a cover for a love of most things 80's. I liked almost all of the references which just added to the geek out.

Enough about me and back to Wade. I liked Wade, he's the unlikely hero. The boy who has nothing but somehow ends up being known round the world as he and his friends compete to find the eggs. You want him to win even when he is at his lowest because he needs a break. He deserves it and he deserves to get the girl too. He's the good guy. The small lone wolf against the big, ruthless corporate body with the evil leader whom we definitely don't want to win. Plus the girl he is in love with is a fellow gunter and she kicks ass. She is just as intelligent, just as determined and is funny to boot. We like his best friend too so it seems a shame that only one can win.

Wade and his friends not only have to find these eggs first but they also have to avoid virtual death. Much like video games if they die on line they reset back to the beginning. They lose any magic swords or weapons or boosts that they have picked up along the way. So this they want to avoid at all costs. It gets trickier as the rules change depending on which world they are on. If they are in the Star Trek universe say (and there is a Star Trek universe which means to me there must also be a Doctor Who universe which equals DAVID TENNANT) then technology rules apply. On Middle Earth it's magic, swords and arrows. On Star Wars it's both.

Don't worry though. It's not all online adventure. There is quite a bit in the real world too as the evil corporation exist in this real world and would love nothing better than to track down these kids trying to take that big money pot away from them.
Posted by KarenSi at 23:42