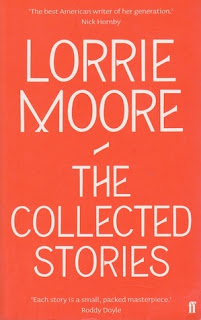 This is actually a combination of four short story collections by the author; Birds of America, Like Life, Anagrams, Self Help. All American based and covering all walks of life. In every single story there is one theme. Someone is lost in some way.

I really find it hard to write a blurb for collections of short stories. Particularly when there is no one character running through them. I feel as if I am doing Moore an injustice by not coming up with one. However, I shall just have to do my best to make up for it with my review.

I was accurate in saying that each of the characters were lost in some way. Some of them are happy with that state and some of them are just unable to find a notch for themselves. Each of them are unique. That's what makes this collection of collections so good. No two characters are the same. Some have similarities same as any collection of people might but they all have their own voice. Granted these stories were written over different periods of time but still. To come up with so many different voices takes a talent I find admirable. I don't care if that makes me easily impressed.

You would think with a running theme of being lost or not fitting in that you would find yourself depressed reading these stories but that's not the case. Moore was able to put a lot of humour into them and not all the scenarios were sad ones. As I mentioned some of the characters were accepting of who they were. The first story is probably the one that I keep thinking back to because it has one of the funnier moments (funny to me). It probably says a lot about my humour but I'm going to share it anyway. This story is about a writer who has been invited to some bigwig event. He's been invited as a token writer rather than because he is of importance and he knows it. Once there, feeling a little nervous and awkward, he strikes up a conversation with his neighbour and unwittingly manages to offend her by talking about politics. One of the topics his wife had warned him to avoid. One of her other warnings was;

"And unless you see the head crowning, never look at a woman's stomach and ask if she's pregnant"

Funny because my dad has actually made that little social error much to my mother's mortification. Obviously this guy has too. There are lots of little gems of humour through out but this is the one that stood out for me.

The only stories which seemed a little different from the rest was from her collection Anagrams. In fact Wikipedia lists it as a novel (I was too lazy to find the book in order to see the titles of the collections within). I think it's maybe listed as a novel because each of the stories (of which there are only a few) contain the same characters. However, in each story the characters are very different. They have the same names and they are all connected to each other in some way but play a different role in each and the importance of each character changes. I actually quite liked that. Thought it was a little different.

I could go on here and rave about more of the stories but I think everyone should get to read them for themselves. I can see it being a collection that people might want to dip in and out of. For me though I had to keep going. They were to good to set down and possibly forget about.