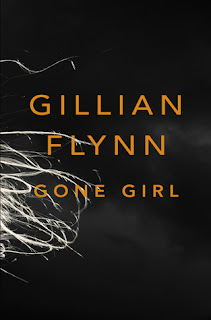 It's Nick and Amy's fifth wedding anniversary. Although things haven't been good of late Amy still goes ahead and creates one of her elaborate treasure hunts to celebrate. Nick, however, has still to think of something as he heads out to work at the bar he owns with his sister. In that morning Amy disappears leaving an upturned house and the door wide open. It doesn't look like she left voluntarily and fingers start to point straight at Nick. As the cracks in his marriage begin to show the more everyone thinks Nick murdered Amy. Nick is determined to prove his innocence and decides to finally solve one of Amy's treasure hunts to prove it.

As I was starting to get my reading mojo back a friend recommended this book. Glad she did as it was one that I read in two days which made me feel like I was back to my old reading self.

Nick seemed quite likable at first. Just a lovable rogue who doesn't quite live up to his wife's perfect expectations. As we hear from Amy's point of view though you begin to doubt him. I didn't want to at first. I was determined that because I liked him for the most part that I was going to believe him and wanted to believe him. It was hard to relate Amy's version of Nick to actual Nick. In the end what I realised about this book that it is actually about a pair of psychopaths. They are both nuts. Amy isn't quite what she seems either and I believe they were both welcome to each other. I really can't say any more about the characters without revealing it too much. Suffice it to say that the only one I actually liked in the end was Nick's twin sister.

I thought this book was going to be another one of those usual mysteries. It was similar to another book that I had read by Flynn where it alternates between chapters of Nick proving his innocence and chapters from Amy from the start of their marriage/relationship. The big twist happens somewhere near the middle which I wasn't expecting at all and the book continues to build from there. Don't worry, I'm not spoiling it as there is another one at the end.

If you like a mystery and you don't mind that the characters aren't quite what you expected then you should give this a try. It's a little bit different and whilst the characters may be crazy it just makes the book all the harder to put down.
Posted by KarenSi at 22:58