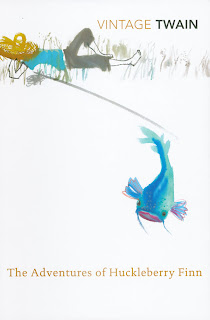 More than anything Huck Finn just wants a quiet life. Sadly everyone is going out of his way to ensure that he doesn't get it. Going from town loser to town hero he has been adopted by a widow and her sister. Both are determined that he will become a gentleman whether he likes it or not. Huck is just getting used to the idea when his dad comes along and Huck is determined to get away from him. So he makes his way down river on a raft with runaway slave, Jim. He is in trouble enough and is just trying to keep out of but sure enough more comes along his way as he is caught up in family feuds, cons, murder and more.

It's not quite as good as Tom Sawyer. Poor Huck doesn't have the mind for mischief that Tom has. He doesn't actually want to do wrong as he has a conscience that bothers him quite a bit. He just wants to be left alone and to spend his days fishing. He is actually a very sweet character and as a reader I just wanted him to get his dream. Whether that was the best thing for him or not. Every time he seemed to settle just a little something would come along and spoil things for him.

I loved the character Jim too. I wanted him to get free and to find his family. I loved how superstitious he was. Saw bad luck in everything. The only mischievous thing about Huck was that he would play on poor Jim's superstitions. In the end though he would tell him the truth and occasionally he would be caught up in the superstitions too. One example is that Huck picking up a snake skin is given the blame for every bad thing that happens to them.

I did get a little bored with the con artists at one point. I was actually quite glad when they eventually left the scene. It's my only criticism of the book and even then it's only miner since I did find them amusing most of the time. I loved the ending too. Seemed apt that Tom would end up buddying with his best friend again.

I read this as part of the classics challenge hosted by Katherine on November Moon. I used the challenge as an excuse to read it after re-reading Tom Sawyer for another challenge. Shocking that I had read one and not the other.
Posted by KarenSi at 23:00