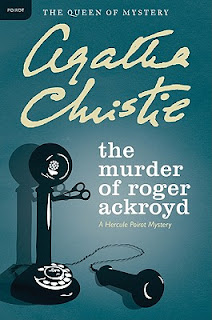 Dr Shepperd is the dear friend of Roger Ackroyd. Poor Ackroyd is going through some troubles and as a Doctor and a friend he feels he must hear them out. He confesses to proposing to a woman who refused him as she had murdered her husband and she couldn't take the guilt. It's only after her suicide that Ackroyd discovers that she is being blackmailed and by whom. Before he can tell anyone who the blackmailer is he is murdered himself. Luckily Hercule Poirot is living next door to the good Dr and the niece of Ackroyd convinces him to find out who the murderer is. His stepson is the main suspect but he is in hiding and the niece is convinced of his innocence. Poirot agrees to take on the job and the good Dr takes the place of his old friend Hastings.

I love Agatha Christie. This is the book I was most looking forward to and it didn't let me down in any way. I was a little put out at first that good old Hastings wasn't in this one. His character whilst irritating at first grew on me and amuses me quite a bit. I thought I was going to miss him but he was replaced by the Doctor who just so happened to live next door to Poirot. He wasn't as amusing as Hastings but he still did the job. In fact he was a little brighter than Hastings, truth be told.

Well with out going into detail, as I don't want to spoil it, I guessed one or two of the mysteries involved. You know Christie, she likes all her characters to look guilty and one by one those guilts are explained away. This book is no different. As I said I guessed on or two of them. I did have an inkling early on as to who the murderer might be but I dismissed the idea thinking there was no way. Turns out if I had stuck to this inkling I would have been right. As it was I was completely surprised and it made a fantastic ending. I will say on thing that surprised me though. Poirot gives the murderer a way out which I wasn't expecting. I'm afraid if you want to know more on that though you will have to read it.

This is my second book of the readathon and I have to confess I am beginning to flag a bit. After my next update in 15 minutes I am away to sit in a cool room drinking tea.
Posted by KarenSi at 16:45