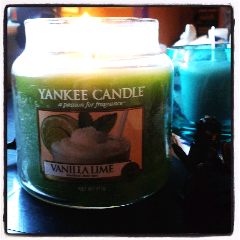 Still getting used to this whole instagram malarky. I must admit I like the effect and I could get addicted to it if it didn't kill my phone battery. We'll see how long it takes before I get bored.

The photo is actually relevant (sort of). This candle was bought especially for the readathon. It's my favourite and when I went to get a new one yesterday it was half price. Otherwise I would not have bought the larger one. I know a wee advert for Yankee candle here but I LOVE them. This one you only need lit for five minutes before your room smells like a packet of sweeties. Great if you like fruity smells. The wee lego man routed me on.

Well, the readathon is over and I have had a four hour nap. Have to admit that I did read for another hour after. Ellie warned me about Me Before You by JoJo Moyes. She wanted to stay up all night reading it and I wanted to keep going. I should have read that one rather than the Doris Lessing.

Anyways, I had loads of fun doing the readathon. My last post says my achievements so not going to go into it again. But I will say a big thank you to everyone who sponsored me. I raised £115 for Crohns and Colitis UK. Not bad considering I was doing it for a bit of fun. It did add to the pressure though of staying awake. I would have had a nap otherwise.

I'm not going to be reviewing The Grass Is Singing by Doris Lessing. I think that's the first book I won't have reviewed here since I became addicted to book blogging. I don't think it would be fair to the book. I didn't really enjoy it but I think it had more to do with the fact that it was the wrong book to choose for this. I did have my doubts when I added it to the pile but I wanted something just a tiny bit heavier in there. Lesson learned. I also read it during the hardest hours so I don't think I was being fair to it. Truth is I think under normal circumstances I would have enjoyed it and probably should have started Me Before You in its place.

I will be doing this again but not sure if I will add the pressure of raising money. If I can I might get more people involved and we could do it as a group, less pressure that way. It may not be an issue though. With course work I may have to limit myself to 12 hours which is fine. I also think that next time I want to take part in more of the mini challenges. I was set on the reading side I think I missed out there.

Hope everyone who took part had lots of fun. I am off to read believe it or not.
Posted by KarenSi at 11:57