The Doctor Will See You Now - Max Pemberton 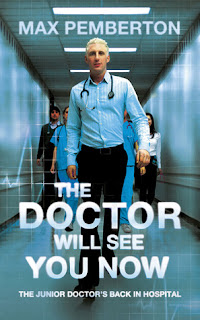 Max Pemberton has finished a year working in the community. He is now about to commence a year back on the wards. The community has made him forget the fast pace of the hospitals and he feels a little out of place having been thrown in the deep end. Thankfully his flatmates, the nurses and secretaries all help to see him through. Now working on a general medical ward and dealing with dementia patients he feels anger when he sees how easily they are mistreated.

This is the third book by Max Pemberton in his career as a doctor. It's from this one that you can definitely see that he has grown. He still gets nervous about unknown procedures and his first day back was rather funny to read (probably not so funny for him). You can see that he is now more confident in his own abilities.

I liked this one more than the middle book. I think part of that is that I recognised a lot of what he talked about from my own studies. A lot of the problems he mentioned in the book such as interpreting illness in dementia patients, being their spokesperson and the health and safety aspects of the wards have all been discussed in class (obviously from a nursing perspective).

It still has that sense of humour though. He is still able to laugh at himself and I love the interaction between himself and the secretaries. I also love the part his flatmates have to play. I hope there will be more of these books to come as I don't think I would get bored of them. A great first choice for the readathon.
Posted by KarenSi at 10:44