Me Before You - Jojo Moyes 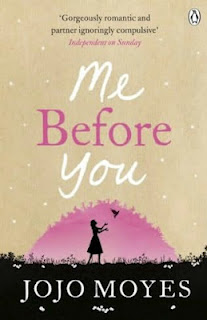 Louisa Clarke has just been made redundant after working 6 years at the Buttered Bun. She's 26 and still doesn't know what to do with her life. However, her family is in financial difficulty so she has no choice but to take on the job as carer to a 35 year old quadriplegic man. She has never done any type of caring job before but then she's been hired for her bubbly personality and chattyness. Will Traynor had a very hectic life which he made sure he filled to the full. He was in a high stress job which he loved. Had a great crowd of friends and made sure that he tried everything which meant adventure holidays. One tragic day he is hit by a motorcycle and now he has to rely on everyone else to do things for him. It's not the life he wants and he can't stand thinking of the life he had. In his eyes that leaves only one option. Lou though has other ideas. She has come to care about this man despite their rocky start and is determined to prove to him that life is worth living.

Despite the readathon I stayed up until late on Sunday finishing this one. I was warned that might happen mind you. First of all Louisa doesn't actually come across as 26. She comes across as a lot younger. Possibly because she is doesn't know what to do with her life and is happy just living her small life and not putting herself out there. It's not just that though, it's her way of looking at life too. Sometimes her younger sister seems older than her. It's not a flaw though because I actually liked her. I liked the fact that she was a bright and happy person who always looked on the positive side. I liked all the other characters too. Will is intelligent and despite the way he treats Lou at first he doesn't come across as bitter as what he could have been. The only character I didn't take to was Will's mum but you never really saw her point of view.

I'm not going into the whole debate of euthanasia. It's a touch subject and to be honest I would be here all day. Hat off to Moyes though for tackling the subject and she did it well I thought. She was able to show not just how the individual feels but how it effects those who love them. It did have me in tears mind you. I sobbed for the better part of 80 pages. Been a long time since a book did that to me. Was a pretty sight I'm sure.

Despite the subject it was a fairly easy read and, like I said already, one I couldn't put down. It did have a few pages from different characters points of view and I think I would have liked a little bit more of that but otherwise I very much enjoyed it.
Posted by KarenSi at 07:02