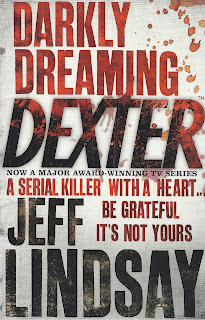 Dexter is a blood splatter specialist working for the Miami police department. His adopted father was a cop and his sister is a cop. A serial killer has begun chopping up prostitutes and dumping them in a particular way. Sister, Debora, is determined to find the killer so that she can finally get that transfer to Homicide she has always wanted. She calls on Dex to help as he seems to have a knack for solving these things. What she doesn't know is why. Dexter is able to put himself so perfectly into the mind of a killer because he is the same. Only his father taught him to go for the bad guys. If he has to kill then kill those who deserve it. This new killer on the seen though is an artist. Dexter can appreciate him and he isn't sure if he wants him to be caught.

I am probably the only person in the world who hasn't seen the tv show. I have heard of it though and knew what it was about. I am one of these sad folk that would rather try out the books first. It may just be the tiredness talking at this point but it annoyed me quite a bit. First of all Dexter doesn't just come across as your cold serial killer. He is supposed to be soulless and dead inside. Instead he comes across as smug and arrogant. There is a very tiny part of him that worries about what his father would have thought. Without that he probably would go ahead and kill everyone. Then there is his sister Deborah who relies so heavily on Dexter to help her. Surely at some point she would have to stand on her two feet? She just doesn't seem to have what it takes to get very far in her chosen career other than ambition. In all honesty she doesn't seem all to bright.

Having said that I did enjoy the story for the most part. It has an interesting premise. I would be tempted to read others in the series but more so watch the tv show. I somehow think they might have done it a tiny bit better (unusual, I know).

Oh, one thing I do recommend. When you are sleep deprived and the only person awake don't read about serial killers. My over active imagination interpreted every creek to be a serial killer coming out to get me.
Posted by KarenSi at 21:27