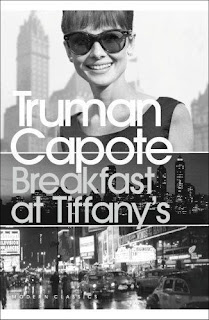 The narrator has just moved into a sandstone building where he hopes to begin his career as a successful writer. Like almost everyone around her he quickly becomes fascinated by his downstairs neighbour Holly Golightly. A New York social lite with a whirlwind life that the narrator is more than happy to be sucked into. He falls in love but Holly isn't someone that can be held onto. Instead he gets to see snippets of her life while he can.

I am a huge Audrey Hepburn fan and Breakfast at Tiffany's is one of my favourites. I have always been put off reading the book because of how much I loved the film. I didn't want it to spoil it. Then when Cold Blood came out and I saw clippings of Capote in that film I couldn't relate that character to my favourite book. Even though I didn't go to see that film I still felt that there was no way that that Truman Capote could have written something anywhere near that film.

Recently though I have been trying to get over all these little prejudices. I saw a copy of this book in a charity shop in almost new condition and I ended up picking it up. I still had reservations but it lasted maybe only a page. For once I am not sure which I like better, the book or the film. The character of Holly Golightly was very well translated to film. I couldn't imagine anyone else playing her part either. Despite that she is meant to be blond with short hair I still pictured Audrey. The ending is the only real difference but we know that from the start of the book. That didn't bother me. I think both endings fitted both formats. The book itself is tinged with a hint of sadness but also of hope. Hope that Holly is out there continuing her crazy haphazard life.

There were three other short stories in the book which convinced me that I could truly come to love Capote as an author and that my love of the first story was just because of the film. I understand that different editions of the book have different stories in them. My copy contained "House of Flowers", "A Diamond Guitar" and "A Christmas Memory". All three were fantastic and I think even those who don't generally enjoy short stories would like them. It's hard to choose my favourite of the three, particularly out of the last two. Diamond Guitar reminded me so much of one of my favourite Stephen King stories, Shawshank Redemption. Not just because it was set in a prison but because it was mainly about friendship and loneliness. I found A Christmas Memory to be particularly sad. It's a happy memory of an unlikely friendship.

I felt that each of the stories contained a little sadness, even if it was just a hint. I wonder if all Truman's stories and books will be the same in that way. Something I very much look forward to discovering. I found this book a delight to read and I only have two regrets. The first is that it took me so long to build up the courage to read it in the first place. The second is that it was so short. I could have happily spent days reading it.
Posted by KarenSi at 22:38