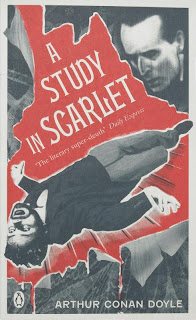 Dr Watson and Sherlock Holmes are just getting to know each other. Dr Watson is finding it particularly difficult to place Holmes's personality as he is constantly being surprised. The most recent is his belief that he can solve any mystery or crime purely through observation and deduction. Watson has his doubts and so Holmes proves it to him over and over. The ultimate test arrives when Holmes is asked to help with a murder investigation. A man is found dead in an empty house with no injuries and yet covered in blood. The police have no idea how the dead American came to be in the house or how he died in the first place.

This is the first book featuring Sherlock Holmes but not the first one I've read. My first was The Hound of the Baskervilles. It wasn't my favourite book and I probably wouldn't have read any more books starring Holmes had someone else not convinced me to start from the beginning. I am glad I did because this book was significantly better and more gripping. It's in this book that Holmes and Watson first come together. A little wary of each other but by the end they are firm friends.

The mystery itself was interesting as is Holmes's methods. I very much doubt anyone could have worked it out just from reading about the investigation itself. Holmes keeps to himself just how he came to his conclusions until the very end. By that point we know the why too. I was actually surprised that after the murderer is caught we immediately go to part two. In that section it describes in detail the background of the murderer. Not as told by him or by Holmes but almost as though you are reading a separate story. It made for interesting reading. I did have a problem with Doyle demonising Mormons though. Maybe he just meant that one little community was corrupted. However, although I know very little about them I am sure they aren't the way Doyle described.

I very much enjoyed this book. As I said I am so glad that I gave the Sherlock Holmes stories another chance. I was extremely disappointed after The Hound of the Baskervilles and this one completely made up for it. Plus I love these covers. It's part of the penguin classics range. I bought the second one in a charity shop in amazing condition and of course had to get the first one with the same cover design. Looking forward to reading more of these books.
Posted by KarenSi at 22:53