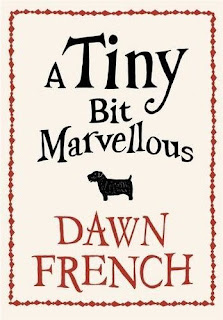 Mo is about to turn 50 and is feeling a little lost in life. She loves her family and her job but is feeling a little bit isolated. That and she is fed up constantly battling with her eldest, Dora. Dora is about to turn 18 and is just as confused as her mother. She is also just about to finish school but has no idea what to do next. She hates her mum and her life in general. Best friend Lottie is the only one who understands her. Then there is Oscar. The 16 year old son who insists on being called Oscar due to his love of Oscar Wilde. He is looking for his first love but in the wrong direction.

I read this one for my book group. It had some good reviews which was why it was picked. I, on the other hand, was wary. I always am when it comes to anything written by a celebrity no matter what they are famous for. It's all very well for them to write their biography. The constant stream of celebrity biographies at Christmas time is irritating but I am resigned to it. When any of them try their hand at fiction though I can't help but feel cynical. I was about this even though I grew up watching and loving French and Saunders. Plus Dawn French was always my favourite of the duo.

Anyway, these worries were all for nothing. The book didn't really seem to go anywhere at first to be honest. I think I was a little more than half way through when it seemed to pick a direction. That aspect was a little frustrating. Had I not been enjoying the book I probably would have given up on it for that reason. What I liked about it was that it was completely funny. The battles between mother and daughter were hilarious. Especially when you got to see it from both sides. The daughter was very much a typical teenager. Confused, selfish, scared, self conscious and with a mouth on her. Mo is trying to understand. Being a child psychologist she should but Dora won't let her in. Meanwhile she is feeling turmoil of her own. She's just realised she has hit middle age and she doesn't like it. All of these things make up for some very funny moments.

The funniest character though was the brother, Oscar. Quite a lot of the book was dedicated to his point of view even though the battles of his mother and sister were barely acknowledged by him. Instead we are treated to a very confident Oscar who has insisted he has found love in the form of a colleague of his mothers. If Adrian Mole and Stephen Fry were able to have a child together I think the result would be Oscar. It certainly made for some very funny moments. The main one being his therapy session with his love interest, Noel.

The one thing that surprised me is that at no point did the book remind me of the author. I think when you are reading fiction by a celebrity it's easy to channel their voice. You can't help but hear it as you read. Or at least see something of them in the book. I think that can be another down side to celebrity fiction. There wasn't any of that there. Had I been handed this book without the cover I wouldn't have guessed it was written by Dawn French at all. A good thing I think.

A very funny book. I actually did find myself laughing quite loudly on the bus but I was too amused to care. A great book if you are looking for something light and you need a few laughs. Although not the best book I have ever read I liked it and I would happily read something else by Dawn French.
Posted by KarenSi at 22:10