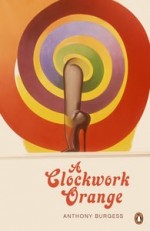 Fifteen year old Alex is the leader of a small gang. He loves nothing more than to spend his time harassing and beating up the weak and the wary. His crew and himself get kicks out of it and they make some money in the process. Egged on by his gang he ups the ante and decides to do a proper break in and steal as much as he can. Things don't go quite as planned and he ends up in prison. After two years he is the model of good behaviour in the hopes that it will get him out again. He even wishes to take part in a trial that will ensure his freedom in two years. However, he isn't quite prepared for what this trial will entail or for the end result.

Another book that I was reluctant to read originally. I have seen this advertised on numerous television show as a book and as a movie. It's always listed under cult classic, controversial or banned books. The banned books should have got me interested but it didn't. Mainly because all I ever heard about it was the violence. Reading about a bunch of teens who dress strangely and beat up the locals didn't appeal to me. I couldn't have been more wrong about this book. In my defense it just hasn't been sold to me properly. Describe it as a disturbing dystopian and I would have been there.

For that's what it really is. The violence is only a part of it. Teens are terrorising the streets and Alex is just one example of that. As a result he is then made an example of. The powers that be discover a way of inhibiting the violence. They take away Alex's choice. He wants to react in violence but he can no longer do it. I found the whole section of the treatment to be disturbing (in a I can't stop reading way). You are seeing it from Alex's point of view but when you read of the terror faced by his tormentors you are left to wonder if the means justify the end. It was certainly very interesting.

Meg of A Bookish Affair mentioned in a comment that Burgess changed some words to get it past the censors. I had no idea to what extent the author went to. In fact I worried at first if I was going to be able to get past that aspect of the book. As I said it is written from the point of view of Alex. The teens of that time have their own way of speaking and Alex narrates using this way. After the first few pages I sort of got used to it and it has it's own lyrical quality. It certainly wouldn't have been the same book without it.

I very much enjoyed this book and I'm glad that I opened my mind enough to read it. I can see myself reading it again at some point in the future. Plus how could I dismiss such a highly praised book from one of my favourite genres - dystopian. Mind you, a number of years ago I read "Earthly Powers" by this author which I loved. It should have been no surprise that I would like this one too.

A little note on the cover. This was part of a series that Penguin brought out called Penguin classics. They published the most popular books of each decade and gave them all these fantastic covers. A Clockwork Orange represents some of the literary genius of the 60's. This was another charity shop purchase but I think I am going to have to look out for more of these covers.
Posted by KarenSi at 11:48