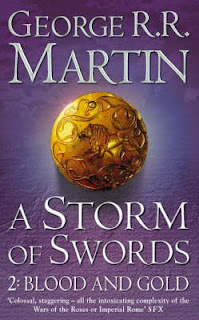 Jon Snow has returned to the Night Watch and warned the few brothers left that the Wildlings are about to attack. Little does he realise that he will become responsible for keeping the wall intact. King Stannis has a choice to make and one he doesn't relish. It means killing his kin but he is told it could win him the throne. Robb, King of the North, prepares to make amends to the Frey's after breaking his oath. Jaime Lannister is on his way home to his sister and family whilst Kings Landing prepares for the royal wedding. Meanwhile Daenerys is continuing her campaign to free all slaves before returning to the 7 Kingdoms to claim her rightful place as Queen.

When reviewing the last book I said that events were at a faster pace and this book was once again no difference. Something unexpected always seemed to be occurring. I even began to dread the end of chapters in case something big would occur and of course it would be a few chapters on before I got to see more from that person. It was very frustrating but in a good way. Certainly made putting the book down very difficult. I would have happily stayed in all week just reading this if I could have.

The one thing this author doesn't mind at all is killing off main characters. He has been doing it since book one but the pace of those deaths seems to be upped with the pace of the book. There were some killed off in this one that I felt sure that it must be a trick. That these characters would pop up again later on having escaped. But alas no. Have to respect an author who can do that. Not all authors are comfortable with killing off established characters. In light of that though I am more than ever confused as to where this book is going. The good and bad sides were never clear cut and this line has been made all the more fuzzier. For now I am hoping that Daenerys will reach the 7 Kingdoms and take over.

As ever, Tyrion is still my favourite character to read from. He seems to be at a cross roads at the end of every book and he is one of the few Kings men I actually like. I also still like Arya and like Tyrion she seems to be at a cross roads too. However, I am slowly but surely growing on Jon Snow and now very much look forward to his chapters. His have proved to be some of the more exciting battles as he is torn in his loyalties. Plus there is of course the added threat of the Others of the North.

Another fantastic book. I can't praise this series enough. I have book four there but I think I am going to take a little break from it and read a few other things that have been vying for my attention. When I say break it will be at the most a month or so. Not like my five/six year break between the first and the second. I should also mention that this is this months first book in the 'Books I should Have Read By Now' challenge. I originally bought this book after first reading "A Game of Thrones". At the time I thought it was the second in the series because it had 2 written on the cover. Not realising that it meant the second part of book 3. Not to worry, at least I discovered my mistake before I actually started reading the book. 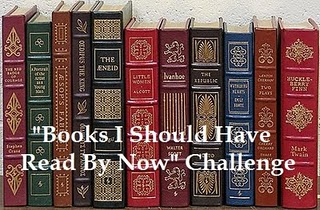