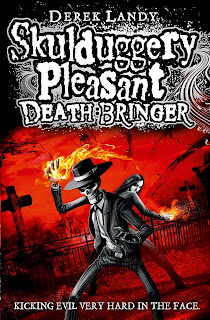 Valkyrie has received some good news. She is no longer expected to be the Necromancers death bringer. Instead the new death bringer is her rival Melancholia. Problem is Mel is a bit unstable. She was forced into her power by fellow Necromancer Crave who carved symbols into her skin. So once again it's up to Skulduggery and Valkyrie to save the day. They must stop the death bringer from bringing about the passage which could lead to the death of millions.

This wasn't my favourite book of this series. In fact I was a little disappointed in it. It still had the snappy humour and the action but it just felt like something was missing. Mainly a lot of my favourite characters were missing. The focus was on the Necromancers this time and so none of the usual bad guys made an appearance (unless you count Scapegrace). It just wasn't the same. Some of her friends were also missing or didn't make much of an appearance. Going by the way this book ends there will be even more changes on that front.

What I really wanted to know was what happened to Tanith Low. What happened to her at the end of the previous book left me on edge and I couldn't wait for this one to find out what came next. Sadly Tanith was mentioned maybe a handful of times and the character herself didn't make an appearance. On that front I guess I will just have to wait for another book.

The story itself was a little slow going. I felt that quite a lot of it could have been edited. Mind you, I was reading this one at home so it could be it was slow going because I took my time reading it. There are a few surprises in there but no jaw dropping moment or revelation at the end as has occurred in previous books.

It sounds like I didn't enjoy the book. I did, it just was in no way as good as the others. I still liked the humour between Skuldugger and Valkyrie. They still make a great team and I am looking forward to the next one.
Posted by KarenSi at 22:45