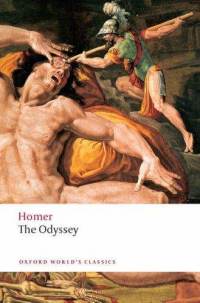 Telemachus is having to watch his inheritance being wasted away by his poor mother, Penelope, suitors. After years of putting up with it and with the help of Athene he leaves to find news of his father Odysseus who left for Ilium almost 20 years before. Meanwhile Odysseus has been kept prisoner for years by the beautiful goddess Calypso as she has fallen in love with him. He, however, just yearns to return home. His continuous weeping for his wife and home melts the heart of Athena and she interferes with the help of her father, Zeus. Soon he is on his way home but must face a few more trials before revealing himself to his kith and kin.

This edition is in prose. I didn't realise that when I picked it up. It's the same publisher and translator as my copy of The Iliad so I just assumed it would be in the form of a poem. Was a little disappointed when I discovered it wasn't. I generally I am not a poetry reader but with the Iliad it added a sense of rhythm to the story and I very much enjoyed that. I did try to find one written in poetry but gave up and just forced myself to get over the fact that I was reading it in prose.

Despite the disappointment it is a fantastic tale. Actually the story really involves several tales. You have the running story of the suitors ruining Odysseus' great hall and his revenge on them. The bulk of the book though is filled with stories of Odysseus' failed attempts to get home after the sacking of Troy. I think I can safely assume that it's this part that make people enjoy it more than the Iliad. It's filled with angered gods and mythical creatures. I was particularly excited when I got to the chapter with the Cyclops.

Poor Odysseus, all he wanted to do was to get home. However, there were times that it was difficult to truly sympathise with him. I suppose I am using today's moral standards when I am reading it. He is upset that the suitors evil-doings and yet thinks nothing of raiding the home of the cyclops. Near the end of the book he even mentioned going pillaging to return his hall to greatness once more. I also find it funny this expectation of visiting a King and expecting to come away with many fine gifts. I am sure though that that's the norm for ancient Greek culture. I shouldn't really be surprised about the pillaging part as many cultures did this.

I actually found The Iliad easier to read. Possibly because the poetry created a rhythm. However, I think I still prefer this one. I certainly loved all the different tales within. Anyone else who wants to read this but feels intimidated just give it a try. If I can read it and get something out of it anyone can.
Posted by KarenSi at 00:05