A is for Alibi - Sue Grafton 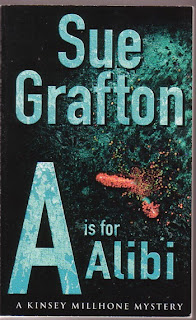 Kinsey Millhone is a Private Investigator in the state of California. She is hired by Nikki, a woman just out of prison for murdering her cheating husband. She wants Kinsey to find out who really murdered him and who set her up. Kinsey believes that Nikki was wrongly imprisoned and so agrees to take the job. It soon becomes clear that she is investigating not one murder but two. A young woman who was an accountant for the dead husband was also found murdered in the same way four days later. Surely there must be a connection.

Is it just me or is first person narrative an overused tool in crime fiction? Seems to be be especially popular when the main character is a PI. It's not my favourite writing style. Too often the author feels they have to account for every movement of the character narrating. I always find it to be a little annoying when I start reading a book but with this one it soon faded. I could put up with it.

We actually learn very little about Kinsey as a character in this book. She finds it difficult to open up and share and so we know very little about her back ground. Rather than being frustrating it's actually quite nice. It means there is more focus on the investigation itself. Although there was some of her personal life in there just to keep us interested. I am sure we learn more as the series goes on. It was actually quite refreshing having the main character as female. I have read a few books where the main police investigator is female but not a PI. It could be that I just haven't read enough but I liked the change.

Over all it was a very easy read. Not at all taxing and I quite liked that too. Perfect for when you don't want to have to think about anything. The person behind the murders was obvious from early on I felt but not the why. So there were still some surprises. In fact Kinsey herself seemed to come by the answer by accident.

This was perfect for the mood I was in and I very much enjoyed it. I can see myself reading others in the series. However, I can also see myself getting bored about half way through it unless the author gives us more from the main character. This book was also the second for this months 'Books I should Have Read By Now' challenge. I originally bought this one about five years ago when I first started reading Janet Evanovich.

Email ThisBlogThis!Share to TwitterShare to FacebookShare to Pinterest
Labels: Book Review, Books I Should Have Read By Now Challenge, crime, Sue Grafton