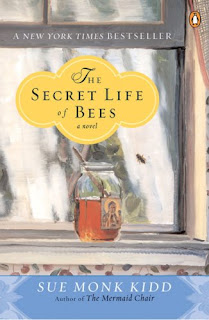 Rosaleen has been placed in prison and beaten after mouthing back to the the three most racist men in their small town. Lily decides to rescue her as Rosaleen is the only person who loves her. She uses it as an opportunity to run away from her abusive father and to find out more about her mother. With only a few clues amongst her mother's personal items she ends up in the home of three amazing black women who keep bees for a living. Despite the fact that the civil rights movement is still in its infancy August, June and May take in Lily and allow her to stay with them. They know the story she tells isn't the real one but they give her the time to tell them the truth. Until then Lily falls in love with life there. She learns all about keeping bees and that she can be loved.

This is another second hand purchase which is why I managed to pick up the American edition. I actually prefer the American cover to the British for a change. I wanted to read this for a while now and mainly because of the bees than the actual main plot. I love bees. If I could keep bees in Glasgow I would. Every spring I buy my mum something for her garden and usually I pick out something that will attract the bees (not wasps though as they are the sum of all evil).

I found this book to be a little slow starting at first. I found it difficult to place Lily's age and in the first 50 pages this was a little off putting as it's written entirely from her point of view. Most of the time she came across as a girl much younger than 14 and other times (rare times) she appeared much older. I could see that would more than likely be a result of her unhappy childhood but it was a little strange at times. It took a while but Lily did eventually grow on me. Her immaturity annoyed me at the start but eventually all I wanted was for her to have some happiness in her life. Something she discovered when she found the three sisters.

I did like Rosaleen too but I didn't always like the way she was portrayed. The author couldn't seem to make her mind up as to whether she was a strong or week character. One minute she is fighting for her rights and not caring what anyone thinks. The next she is following Lily around like a puppy dog and allowing her to speak for her. The three sisters on the other hand I liked instantly. Even June who came across as a little spiteful at times.

I saw this book as a lovely story of friendship, family and discovery. I think the ending was a little too perfect but for once I could let that go. I think I would have been upset had it ended any other way. It did mean I couldn't really take the book seriously as a whole but I still enjoyed it. By the time it ended it was a feel good story. I think we all need one of those every now and then.

As for the film I haven't seen it yet and I now don't think I will. I just can't see Dakota Fanning in the role of Lily. The description of Lily's appearance alone makes her all wrong. I also can't see Queen Latifah and Alicia Keyes in the roles of August and June. I watched a clipping of the film and it just didn't feel right.

A good book though, I recommend it if you need something light with a fluffy ending.
Posted by KarenSi at 23:41