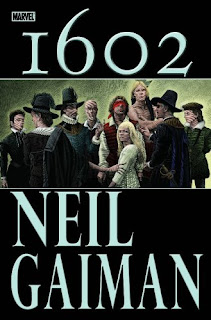 Dr Strange and Sir Nicholas Fury are both in the employ of Queen Elizabeth I and they both distrust each other. However, they share the same concern that the strange weather could mean the end of the world. Not to mention the threat on Witchbreads from King James of Scotland, Spanish Inquisitors and Doom. Soon they must work together to combat all of these threats and help save the world.

I have always loved super heroes but growing up I never read any of the comics. Ever Saturday though I would watch Spiderman, X-Men or the Fantastic Four. My knowledge of comic book super heroes is limited to those and to the films I watched later. When I was little a comic book meant the Beano. Later I thought about trying to get into them but where do you start? There are so many different ones and I would want to start from the very beginning. So I didn't even try. I picked up this one because I love Neil Gaiman and it seemed like my limited knowledge would be enough.

I was right thankfully. Reading the introduction by Gaiman was enough to give me an idea of the characters I could expect. Many of whom I would recognise from the cartoons. What I liked about this book is that it took aspects of history. Queen Elizabeth at the end of her reign, James I at the start of his, the witch hunts and the Spanish Inquisition. I enjoyed it and had it played more on these parts then maybe I would have enjoyed it all the more. Sadly I grew quickly bored and had to force myself to finish it. It all seemed a little too easy but should I really expect more from a graphic novel? My knowledge of them isn't that great so I can't answer that myself. I did love the art work. There were a few prints within that I thought was very well done but that's not enough for me.

Truth is I wonder if maybe I am just not the graphic novel type. A few years ago a friend was surprised by the fact that I had never read one (he was aware of my other geeky interests). He said the same thing about having never watched anime other than "Spirited Away". He was right about that and I now have a collection of these films which I love. I trusted him with the graphic novels and picked up several (including this one). I never did get round to reading them though. So I have decided to theme May. It will be the month I decide whether or not I can appreciate graphic novels. It will also give me a chance to get through the pile I have. I am probably going to start with Heroes vol 1 and 2 as they are closer at hand.
Posted by KarenSi at 04:52