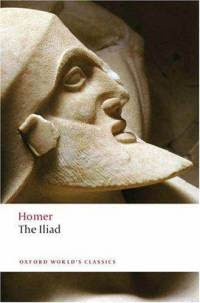 Since the readathon a few weeks ago I have been following a blog called A Literary Odyssey (it's a great blog, you should check it out). The writer of this blog hosts readalongs which I love the sound of. It's like an online book group. I noticed that the next book is The Iliad and so I have decided to join in.

I bought the book at the start of the year and it is still waiting on me (I have other books that have been sitting there a few years so it's actually lucky to have such a short wait). I bought it and The Odyssey because I keep coming across references to them in science fiction books. In a few they are even used in detail. The first real reference (or the one I noticed) was in Tad Williams "Otherland" series. It's a fantastic series and part of the fun was recognising all the books including, The Day of The Triffids and The Wizard of Oz. Some of the main characters are trapped in one of the battles during The Iliad whilst later another believes he is Odysseus. Those were some of my favourite parts and it did pique my interest.

More recently I read Dan Simmons Ilium which also has references to different books but mainly The Iliad. In this case the battles were being re-enacted (although only the Gods and the scholar were aware it was a re-enactment) with the Gods watching on. It increased my interest once again and so I picked it up. If I had done the top ten of most daunting books during the Tuesday Rewind this would have been on the list. Poetry is not my strong point and I have never attempted classics such as this. I want to though which is why I am looking forward to joining in the readalong. The idea of Greek Gods, myths and legends have always appealed to me.

If you want to join in to there is a sign up on the blog. It starts Sunday.
Posted by KarenSi at 02:29